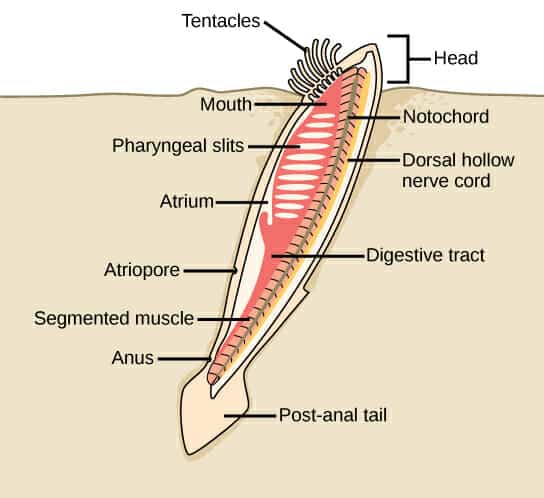 The classification of organisms allows us to group them based on characteristics they share.  Over the years this has led to a better understanding of the species all around us.  All vertebrates belong to a class of animals called chordates.  Chordates at some point in their lives have a notochord, which is a flexible rod that supports the chordate’s back.  They also have a nerve cord that runs down their back like a spinal cord.  This carries messages back and forth between the brain and the nerves.  A slit in the throat is also characteristic of chordates.  Some chordates, like fish, keep their slits, which turn into gills whereas others go away before birth.

Vertebrates are chordates characterized by the presence of a backbone composed of a series of bones called vertebrae.  The vertebrate skeleton is an internal skeleton or endoskeleton.  It supports the body, protects organs, and gives muscles a place to attach.  Fish, amphibians, reptiles, birds, and mammals are all different types of vertebrates with unique characteristics.

The examination of fossils over time revealed that the first bony, internal skeletons belonged to fish.  All fish are ectotherms that live in water.  An ectotherm is an animal whose body does not provide much internal heat, so its temperature depends on the temperature of its environment.  They are often referred to as cold-blooded.  An endotherm, however, can regulate its own body temperature by controlling its internal heat, and it is often referred to as warm-blooded. 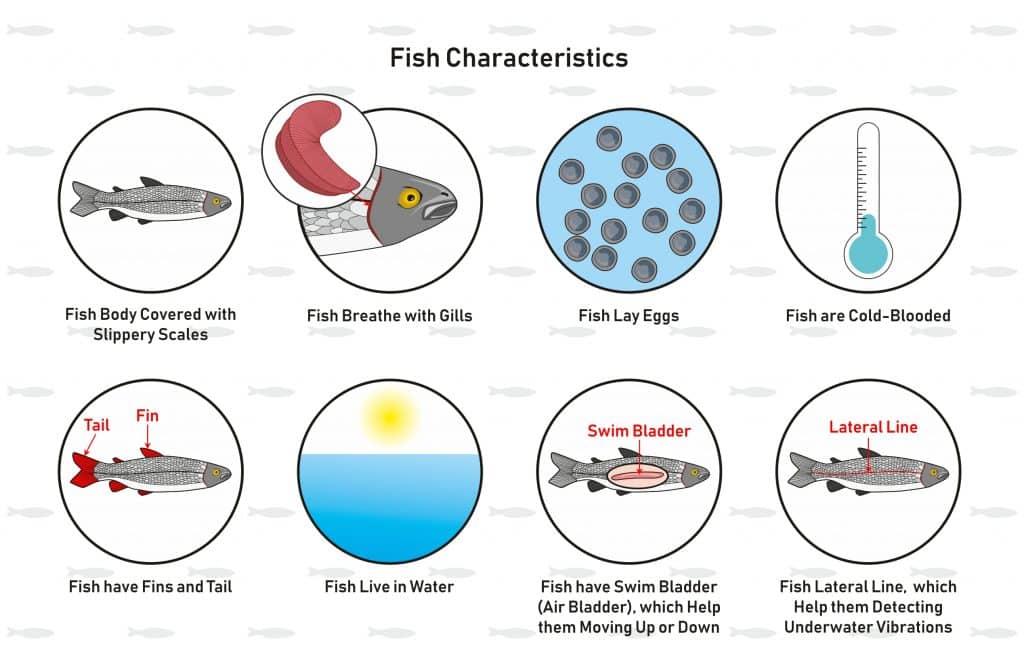 Amazingly diverse, fish are also distinguished by the presence of scales and fins and the ability to obtain oxygen through their gills.  Almost all fish reproduce by sexual reproduction, which is the joining of a sperm cell in the male and an egg in the female.  Fertilization is external in fish.  Males and females of a species will come together in large groups to release their eggs and sperm in the water.  This is called spawning.  This increases fertilization and the chance of an embryo to survive. 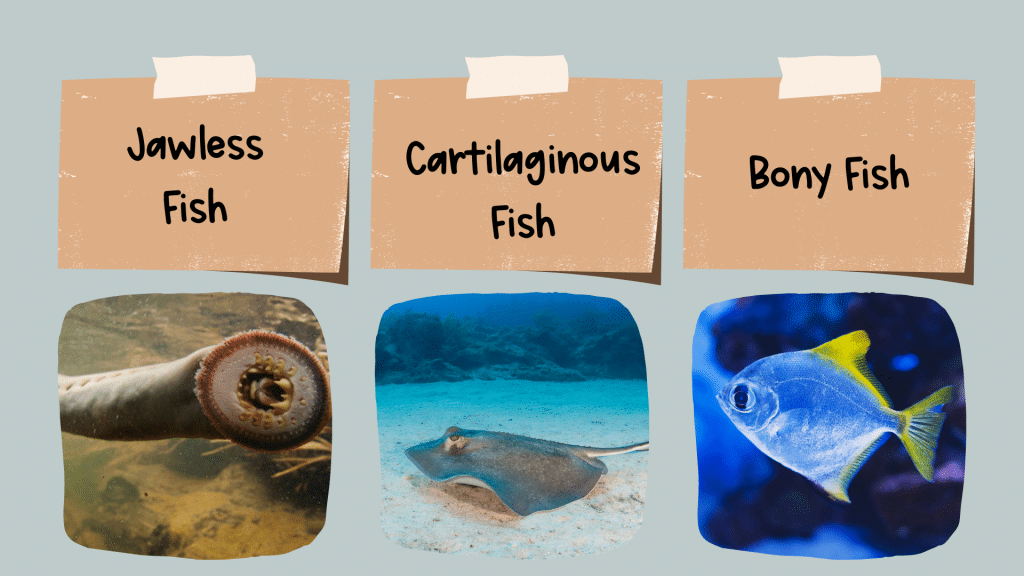 Jawless fish, like lampreys and hagfish, were the first vertebrate to evolve.  They have slimy skin and no scales, resembling an eel more than a fish.  Their skeletons are comprised of cartilage instead of bone.  They have a notochord, which provides the main support for their bodies.  A jawless fish has no jaw, making them filter feeders that suck up water and debris from the ocean floor and then filter it out of their bodies as waste.  Lampreys are parasitic and feed on fish by attaching to them and sucking up their bodily fluids.  Hagfish have eel-like bodies and secrete slime.  They are scavengers that feed on dead fish and carcasses.

Cartilaginous fish, like sharks, skates, and rays, are fish that have jaws, tooth-like scales covering their skin, and skeletons made of cartilage, which is a firm but flexible tissue.   Sharks have very tough skin and are covered in tiny scales called dermal denticles, which reduce friction when they’re swimming.  Because rays are made of cartilage rather than bone, they are agile swimmers and are able to move quickly through the water.

Bony fish are the largest group of fish, including tuna, trout, salmon, and carp.  Bony fish have jaws, scales, and a pocket on each side of their head that holds their gills.  Their skeleton is made of hard bone, which offers support for a fish’s flexible fins.  It also provides protection.  The presence of a swim bladder, an organ that is a gas-filled sac, increases a fish’s buoyancy, allowing it to float upward.  It helps a fish stabilize at different depths, requiring less effort on their part to stay afloat. 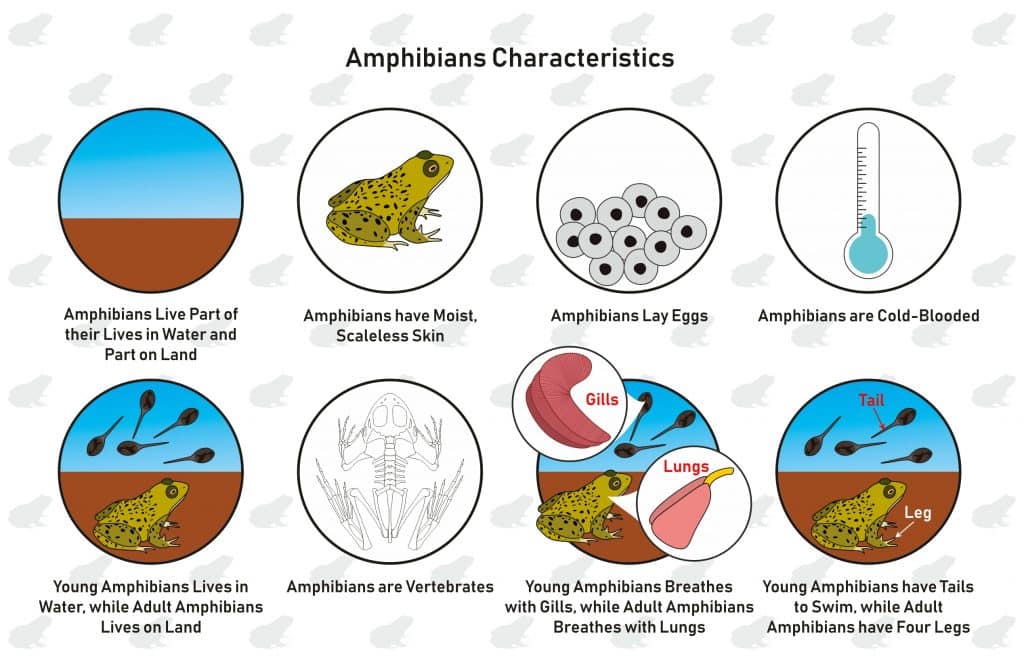 The word amphibian is derived from the Greek word meaning “to live a double life,” referring to the fact that they live in water as larvae but on land as adults.  Amphibians, like frogs, toads, and salamanders, spend part of their early lives in the water and adulthood on land.  Amphibians are ectothermic vertebrates that rely on the temperature of their surroundings to regulate their body temperature.  They live in damp habitats like streams, rivers, lakes, and ponds.  Amphibians have permeable skin, which means liquids and gases can pass through it easily.  This makes them very sensitive to changes in their environment, so when changes do occur, it can have a dramatic impact on them and their survival. 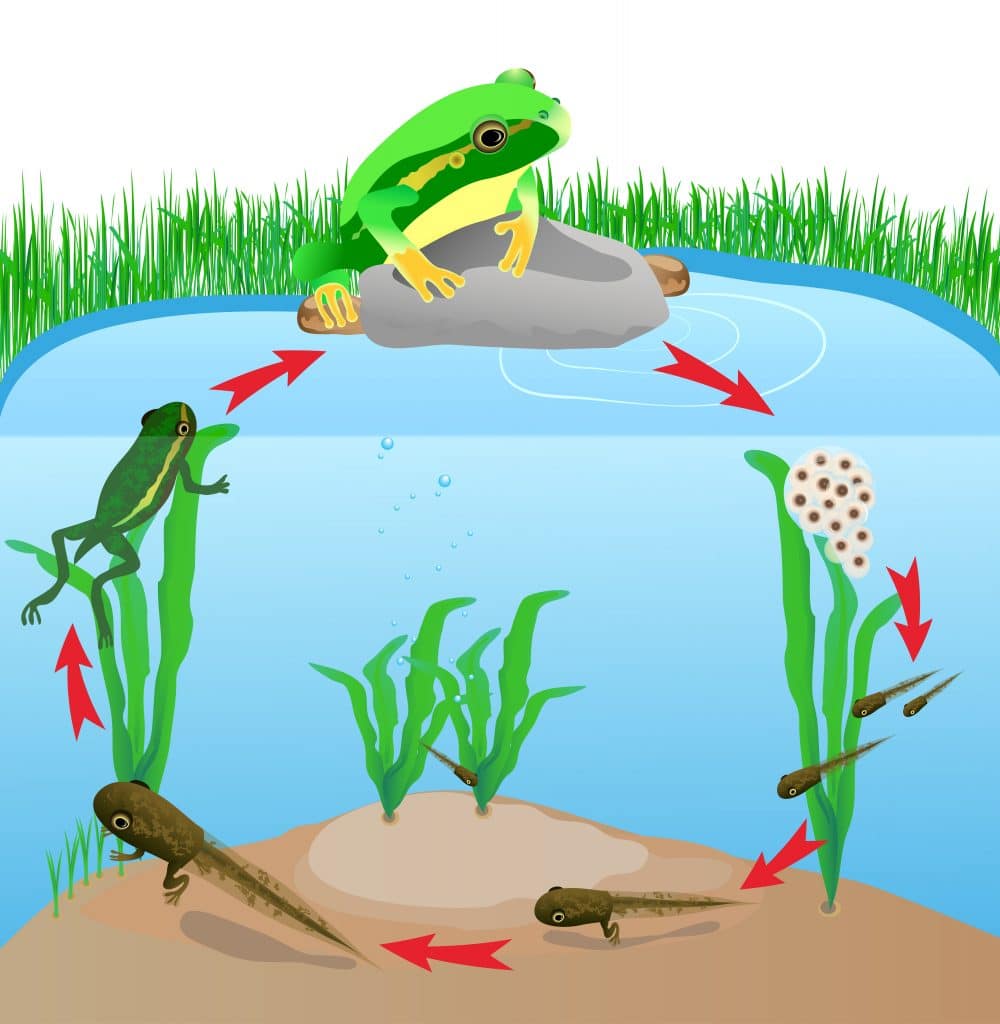 Most amphibians undergo a metamorphosis, which is the process of transformation that occurs from an egg to adulthood.  Frogs lay their eggs in water to prevent them from drying out.  When the egg hatches, it lives in water as a tadpole and breathes using gills.  Weeks later limbs begin to emerge, and the head begins to grow larger.  Next, the tadpole begins to lose its tail.  In the final stage, the frog becomes an adult with four legs.