Ancient Greeks, Romans, and other early cultures observed patterns of stars in the night sky called constellations.  Stars in the sky can be found at specific locations within a constellation.  Characteristics used to classify stars include color, temperature, size, composition, and brightness.  When measuring how dim or bright a star is from Earth, a scale developed by Greek astronomer Hipparchus is used.  The absolute magnitude is the measure of the amount of light a star gives off.  Apparent magnitude is the measure of the amount of light that is received on Earth.  Astronomers also measure how far away objects are from Earth.  A light year is the distance light travels in one year.  Light travels at 300,000 km/s, or about 9.5 trillion km in one year.  Telescopes are also useful in collecting information about the solar system.  Scientists study the spectra, or range of wavelengths that stars emit, using an instrument called a spectroscope, which can spread the light into different wavelengths. 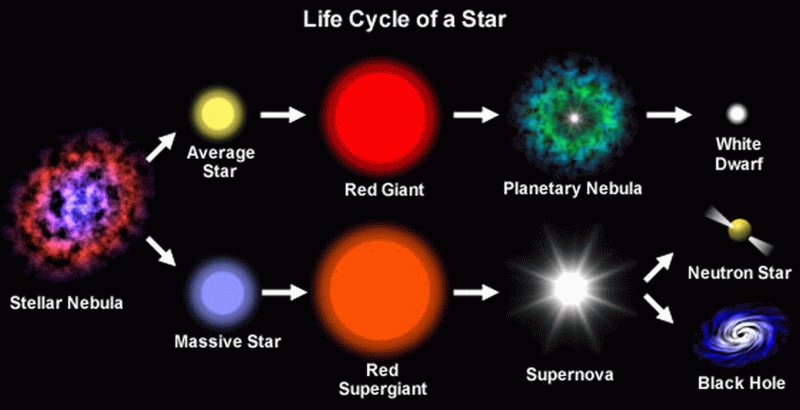 Stars begin as a large cloud of gas and dust called a nebula.  As gravity exerts a force on the particles of dust and gas, the nebula contracts, increasing pressure and temperature inside the core to initiate nuclear fusion.  For low-mass stars up to 8 solar masses (or about 8 times as massive as the sun), the outer layers swell into a red giant.  Over time the star ejects its outer layers, returning to gas and dust while the interior collapses into a white dwarf.  Ninety-nine percent of the stars that you see end their lives like this.  Eventually, after billions of years, the white dwarf will cool and stop giving off light.

High-mass stars, or those more than eight times the mass of the sun, become red or yellow supergiant’s and begin to expel stellar matter.  Eventually the core takes on so much iron that it cannot release energy through fusion.  This causes the star to violently collapse in on itself, and a shock wave travels outward, exploding as a supernova.  Its core becomes a neutron star that is so dense that one teaspoon would weigh more than 600 million metric tons on Earth.  If a star is so massive that the remaining core from a supernova is more than three solar masses, the gravity near this mass is so strong it creates a region that nothing can escape from, not even light.  Therefore, this region is called a black hole.  The matter ejected during a star’s life cycle will provide material for nebulas that will form new stars, planets and other celestial objects.  The matter in stars is recycled many times.

Most stars exist in galaxies.  A galaxy is a huge group of single stars, star systems, star clusters, dust and gas bound together by gravity.  Astronomers classify most galaxies into different types.  First, a spiral galaxy has a bulge in the middle and arms that spiral outward like those that can be seen in the Milky Way.  Secondly, an elliptical galaxy is in the shape of round or flattened balls, and it contains only old stars.  Next, irregular galaxies have no regular shape and are generally bright, young stars.  Finally, quasars are active, young galaxies with black holes at their center.

The Big Bang Theory is the theory that suggests the universe probably began about 13.7 billion years ago with an enormous explosion.