Metals are good conductors of heat and electricity. All of them, except mercury, are solid at room temperature. Metals are located to the left of the stairstep.

The first column of the periodic table, or group 1, is where the alkali metals are found. They are the most reactive of all metals. When they react with water, they produce acid-attacking compounds called alkalis. They all have one electron in their outer shell. They are soft and are able to be cut with a knife. They are silver in color and very shiny when clean. Alkali metals are very reactive and form bonds with other elements, which is why they are often stored in airtight containers or under a layer of oil. They don’t occur in nature in their pure form.

Alkaline earth metals are found in group 2. They are metals that were discovered as compounds inside common minerals in the Earth’s crust. They have two electrons in their outermost shell. They are shiny, ductile, and malleable. They are solid at room temperature and are not as reactive as the alkali metals. They combine readily with other elements. 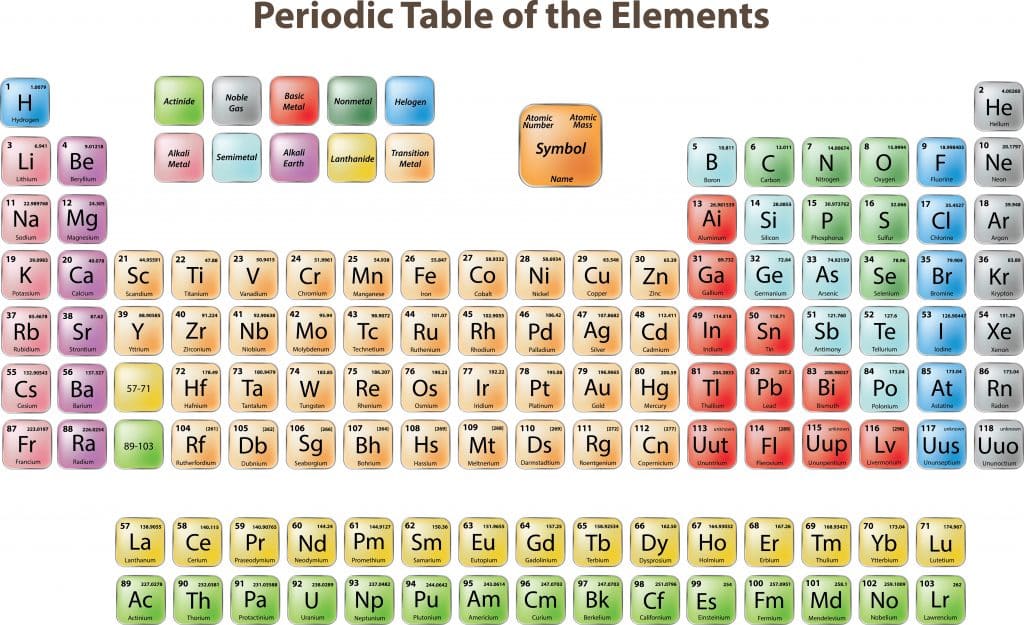 The transition elements are found in groups 3 through 12 of the periodic table. These are the largest group and the most familiar metals because they often occur in nature uncombined. They are generally hard and dense. The element mercury is a liquid at room temperature. Transition elements are not as reactive as alkali or alkaline earth metals, but they form many colorful compounds.

Located within the transition elements are the inner transition metals. The lanthanide series consists of elements 58-71, and these are abundant earth metals. They have large atoms with six electrons in their outermost shell. They are dense and shiny and tarnish easily when exposed to the air. They do not conduct electricity well. The actinide series consists of elements 90-103, and these are named after the first member of the group actinium. They are radioactive and some are produced in laboratories. They are dense metals with high melting points. They are reactive and are never found in their pure form in nature.

The nonmetals are elements that are usually gases or brittle solids at room temperature. Most can form ionic and covalent compounds and are located to the right side of the stairstep.

The noble gases are found in group 18 and exist as isolated atoms. They are colorless, odorless, and tasteless. They do not react with other common elements and do not form bonds in nature. They are always gases at room temperature. They are all stable because their outer energy level is filled. As the group goes down, the density of each atom increases.

Metalloids are elements that make up the stairstep, and they have both metallic and nonmetallic properties. Metalloids are part of the mixed groups, which contain metals, nonmetals, and metalloids. They are found in group 13, 14, 15, 16, and 17.