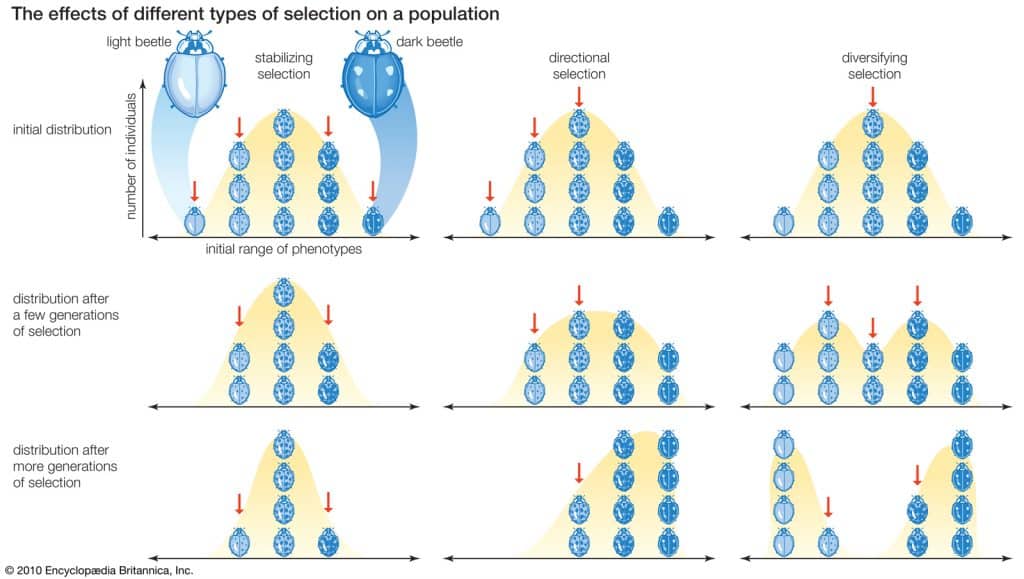 Genetically speaking, evolution is a change in the frequency of alleles in a population over time.  A population is a group of species that lives in an area together.  Evolution can be measured by examining the development of certain traits that have occurred over a span of generations.  For example, if an area is sprayed with pesticides, natural selection will favor insects that have alleles that are able to resist pesticides.  All of the genes found in a population make up its gene pool, including all of the different alleles that are present.

There are three sources of genetic variations that can be found in populations.  These variations make evolution possible.  A mutation is a change in the genetic material of cells, which is often harmful to organisms.  Genetic recombination occurs during sexual reproduction where each chromosome in a pair moves independently during meiosis.  In humans, this can produce over 8,000,000,000 gene combinations.  Finally, lateral gene transfer is the passing of genes from one organism to another (not including the offspring).

The Hardy-Weinberg principle states that allele frequencies will remain constant, or have genetic equilibrium, unless factors cause those frequencies to change.  This principle holds true under five conditions.  First, species must mate with other species at random.  Secondly, genetic changes can affect smaller population sizes.  Thirdly, when there is movement in or out of a population, it can be disrupted.  Fourthly, mutations can cause a change in allele frequencies and can cause evolution to occur.  Finally, when there is no natural selection, genetic equilibrium is disrupted.

When species reproduce and split into two or more species, resulting in the formation of a new species, it is called speciation.  The process of speciation fascinated Darwin.  Each time this occurs the diversity of life increases.  Some differences are easy to see, and others are not.   By looking at finches we can see how speciation occurs.  First, a new population of finches was blown to or flew to the Galapagos Islands from South America.  Later, those populations were separated.  Some birds left this group and flew to another island   Next, there were changes in the gene pool.  Over time, populations on each island became adapted to the local environment.  By eating seeds that they found, their beaks started adapting to new food.  Next, they experienced reproductive isolation.  When birds from populations meet again, the differences in mating behavior or features prevent reproduction.  Finally, because there is competition, species evolve in a way that increases differences in them.  The changes above have occurred time and time again across Galapagos producing 13 finch species.

Another way the evolution of two separate species can occur is through reproductive isolation, or when two populations no longer interbreed.  These barriers stop the production of offspring, and over thousands of years these populations can produce new, distinct species.  This can develop by behavioral isolation, geographical isolation, or temporal isolation.  Behavioral isolation occurs when a species fails to send or receive signals from another species.  For example, a bird may not recognize the mating ritual of another bird, so they cannot mate.  Geographical isolation occurs when there is a lack of opportunity to encounter one another.  For example, a river or a mountain may be a geographical obstacle. Finally, temporal isolation is breeding at different times or seasons.