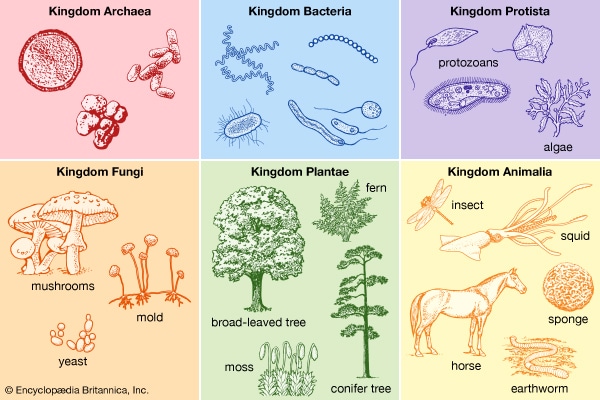 Organisms are placed into domains and kingdoms based on their cell type, their ability to make food, and the number of cells that make up their bodies.  The first is bacteria.  Bacteria are small, single-celled organisms that are found everywhere.  They are present in soil, water, and air.  They are prokaryotic, which means they lack a nucleus.  Their cell walls contain peptidoglycan, which provides structural strength.  They can be both heterotrophic and autotrophic.  E. Coli is an example of bacteria.

Also unicellular and prokaryotic are Archaea, which live in extreme environments.  Found in volcanoes and hot springs, they often can only survive without oxygen.  Their cell walls lack peptidoglycan, and they also can be both heterotrophic and autotrophic.

Next, the domain Eukarya consists of all the organisms that have a nucleus, which includes the kingdoms Protista, Fungi, Plantae, and Animalia.   There are three main groups of protists: plant-like protists like algae, animal-like protists called protozoans, and fungus-like protists like slime molds.  They all are eukaryotic, which means their cells contain a nucleus.  The cells of algae contain chloroplasts where photosynthesis takes place.  Protozoans are found wherever there is moisture, including oceans and freshwater.

The kingdom Fungi includes mushrooms and yeasts.  Their cell walls are made of chitin, and they are heterotrophic, feeding on dead and decaying plants and animals.

The kingdom Plantae are eukaryotes that make their own food through the process of photosynthesis.  Most are multicellular, but some green algae are unicellular.  They are autotrophs with cell walls that contain cellulose.  Mosses, ferns, and flowering plants are examples.

Unlike plants, those in the kingdom Animalia have no cell walls or chloroplasts.  They are multicellular and heterotrophic and include sponges, worms, insects, fish, and mammals.