Earth’s atmosphere makes conditions on Earth suitable for living things.  It traps energy from the sun, keeping the Earth warm and water in liquid form. It also protects Earth from dangerous radiation and meteor collisions.  The atmosphere is comprised of a thin layer of gases that surround Earth. It is made up of nitrogen, oxygen, carbon dioxide, water vapor, and other gases, as well as particles of liquids and solids.  Nitrogen makes up 78% of the atmosphere, while oxygen makes up about 21%.  It also includes water vapor, which is water in its invisible gaseous form.  The ozone forms when lightning interacts with oxygen in the air and creates a molecule of three oxygen atoms. 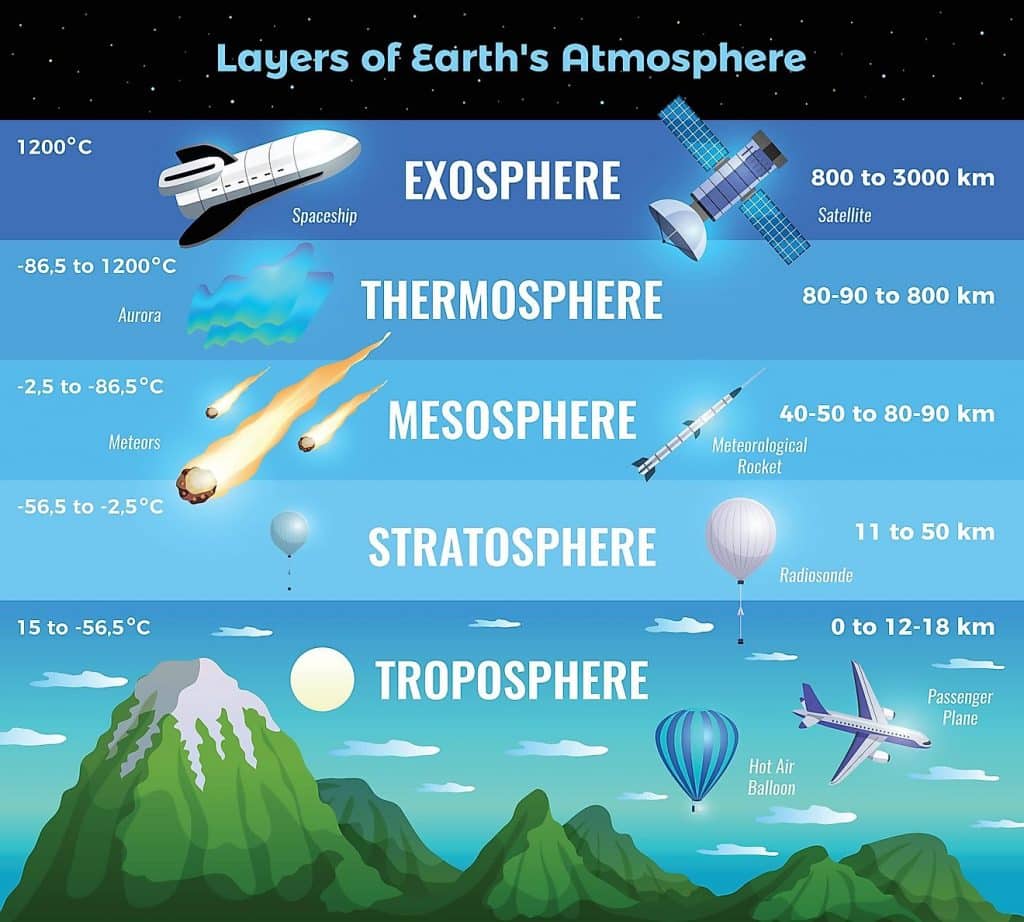 The Earth’s atmosphere is divided into layers, classified according to temperature changes and altitude.  The troposphere is the layer we live in and the layer closest to Earth’s surface.  This shallow layer is where rain, snow, and storms occur.  The stratosphere is the layer directly above the troposphere. It contains the ozone layer, which protects Earth from ultraviolet (UV) rays that kill plants and animals and cause skin cancer in humans.  The mesosphere is the middle layer of the atmosphere, and it protects Earth’s surface from being hit by most meteoroids, which burn up from friction with the atmosphere.  Finally, the thermosphere is divided into two layers.  The ionosphere is the lower layer. It contains ions, or charged particles, that allow radio waves to bounce off and auroras to occur.  The exosphere is the outer layer of the thermosphere.

Because air has mass, it has unique properties, including density and pressure.  Altitude, or elevation, is the distance above sea level.  As altitude increases, air pressure decreases, which also decreases density.  A low air density can make it difficult to breathe with less oxygen.  Air pressure comes from the weight of a column of air pushing down on an area.  It’s measured by an instrument called a barometer.