Air is fluid and moves easily from place to place.  Differences in air pressure cause the movement of air.  The wind is the movement of air from areas of high pressure to areas of low pressure.  Local winds blow over a short distance and are created by the unequal heating that often occurs on land or due to a sea breeze.  They occur within a small area.  A global wind blows steadily over a long distance and is created by unequal heating over a large area.  The movement of air between the equator and the poles produces global winds.  The major global wind belts are trade winds, prevailing westerlies, and polar easterlies.  Because Earth is rotating, global winds follow a curved path, creating a Coriolis effect.  Northern Hemisphere global winds curve to the right, and Southern Hemisphere global winds curve to the left.  Trade winds are steady winds that flow from east to west between 30N latitude and 30N longitude.  Polar easterlies are cold winds that blow from east to west near the North and South Poles.  Prevailing westerlies are steady winds from west to east between 30N and 60N and 30S and 60S.  Jet streams are high winds near the top of the troposphere.  They generally flow west to east and can influence the weather. 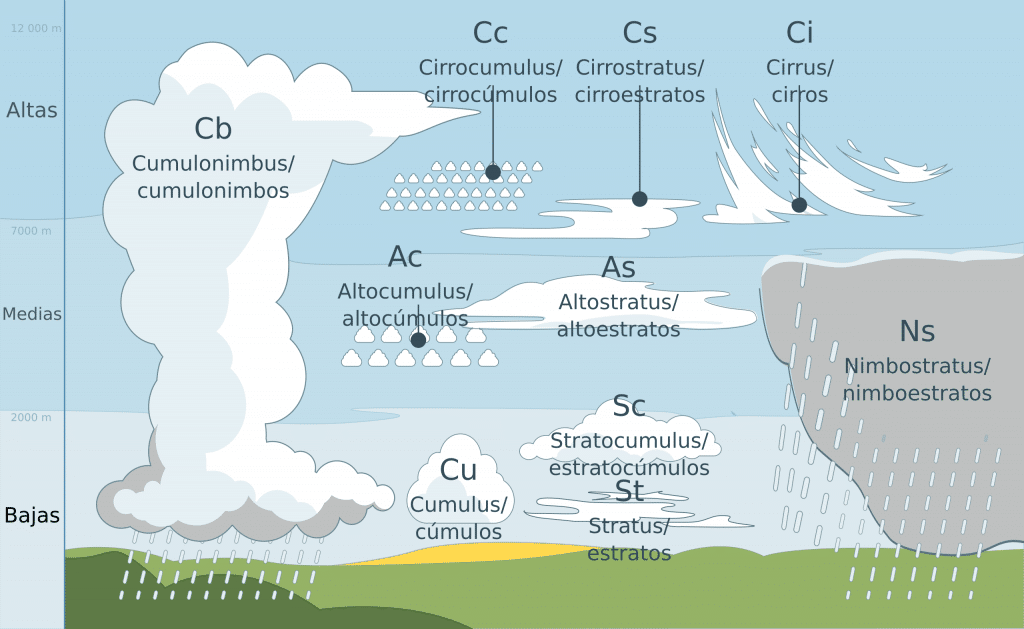 Water is constantly moving between the atmosphere and Earth’s surface.  The relative humidity is the amount of water vapor in the air compared to the amount of water vapor the air can hold at a specific temperature.  The dew point is the temperature at which air is fully saturated because of decreasing temperatures.  Clouds form when water vapor in the air condenses to form liquid water or ice crystals.  Scientists classify clouds into three main types according to shape: cirrus, cumulus, and stratus.  Clouds are then further classified by their altitude.  Precipitation is water in a liquid or solid form that falls from the atmosphere.  Common types include rain, sleet, freezing rain, snow, and hail.