Air pollution is not just harmful to human health.  It can also damage plants, lakes and ponds, and man-made structures.  The majority of air pollution comes from burning fossil fuels, including coal, oil, gasoline, and diesel fuels.  Burning these pollutants produces carbon monoxide, nitrogen oxide, and sulfur dioxide.  Acid precipitation is sulfur dioxide and nitrogen oxide that combine with atmospheric moisture to form precipitation with a pH lower than normal rainwater.  It includes acid rain, snow, and fog.  Photochemical smog is air pollution from the interaction between chemicals in the air and sunlight.  Particulate matter is a mixture of dust, acids, and other chemicals that can be hazardous to human health. 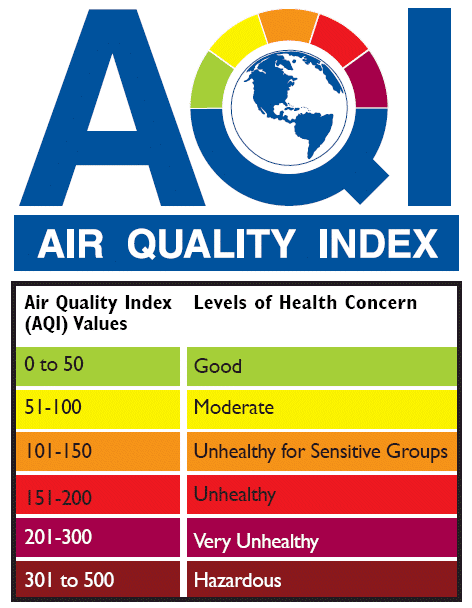 The Air Quality Index (AQI) is an index for reporting daily air quality. It tells you how clean or polluted your air is and what associated health concerns you should be aware of. The AQI focuses on health effects that can happen within a few hours or days after breathing polluted air. The EPA uses the AQI for five major air pollutants regulated by the Clean Air Act: ground-level ozone, particulate matter, carbon monoxide, sulfur dioxide, and nitrogen dioxide.  The Clean Air Act was established in 1970, and it gives the US government the power to set air quality standards to protect organisms and structures from the harmful effects of air pollution.