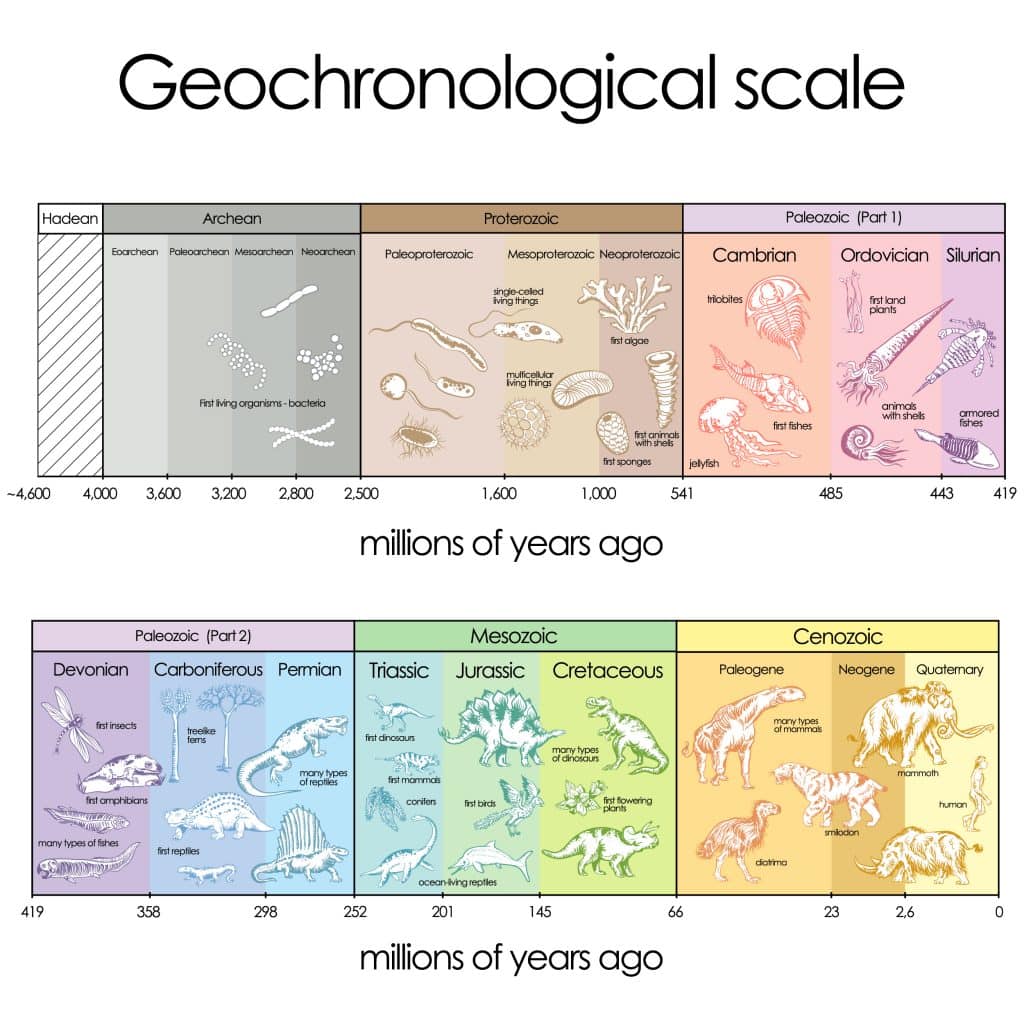 Scientists call the “explosion of life” that occurred at the beginning of the Paleozoic Era the ‘Cambrian explosion’ because so many new lifeforms appeared in a relatively short amount of time.  The early Paleozoic Era occurred between 544 million and 245 million years ago, and it consists of the Cambrian and Ordovician Periods.  It is often called the age of invertebrates because animals without backbones dominated the oceans.  During this time, no life existed on land.  Continents were covered by large, shallow, inland seas.  The middle of the Paleozoic Era consists of the Silurian and Devonian Periods, and it is often called the age of fishes because every main group of fish were present in the oceans.  Also during this time, jawless fish evolved, which are vertebrates or animals with backbones.  During this period, some animals began to invade the land, including insects and spiders.  Continents collided and formed mountain ranges.  The late Paleozoic Era consists of the Carboniferous and Permian Periods, and it is called the age of amphibians.  Reptiles that evolved from amphibians became dominant on land.  Winged insects like cockroaches and dragonflies also evolved.  Continental collisions led to the formation of Pangea, which is all of the continents joined together.  At the end of the Paleozoic Era, there was a mass extinction of many invertebrates.  The reason for the mass extinction is debated among scientists.

The Mesozoic Era occurred 245 million years to 65 million years ago.  It is often called the age of reptiles.  This era consists of the Triassic, Jurassic, and Cretaceous Periods.  Dinosaurs dominated the land.  Small mammals and birds appeared.  Flowering plants like angiosperms also appeared.  Pangea separated into continents, and oceans began to form.  Scientists believed that a mass extinction occurred from a large meteorite impact.

The Cenozoic Era covers 65 million years ago to the present.  During this era, mammals evolved to live on land, in the water, and in the air.  Early in the Tertiary Period, India collided with Asia to form the Himalayas; Africa and Europe collided to form the Alps; and the Cascades and Sierra Nevada’s began to form North America.  New grasses and flowering plants began to dominate the land, and mammals continued to evolve.  Homo sapiens, or humans, appeared about 400,000 years ago.  We live in the Holocene Epoch of the Quaternary Period.