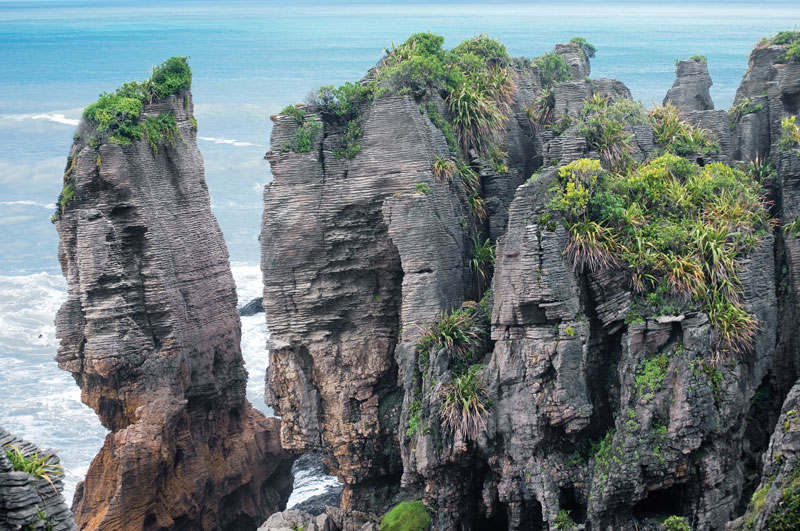 Weathering is the destructive process that breaks down rocks and other substances on Earth’s surface.  It can either occur mechanically when rock is physically broken down into smaller pieces or chemically when rocks break down through chemical changes.  Erosion is the removal of rock particles by wind, water, ice, or gravity.  Together, weathering and erosion work continuously to wear down the material on Earth’s surface.

Weathering occurs slowly, but over time it will break down the largest and hardest of rocks.  Mechanical weathering happens in many ways.  For example, plants and roots grow between rocks, pushing them apart.  In addition, abrasions caused by wind, water, or ice can wear away rock surfaces.  Freezing and thawing also contribute to the process of weathering.  Water expands when it freezes and acts as a wedge, slowly expanding a rock until pieces break off in a process called ice wedging.  Finally, burrowing animals can cause the ground to loosen and break away.

Causes of chemical weathering include the interactions of water, oxygen, and carbon dioxide with minerals that make up rocks, along with living organisms and acid rain.  Water is the primary cause of chemical weathering as it dissolves rock over time.  Oxygen in the presence of water will combine with iron in a process called oxidation, which produces rust.  Carbon dioxide dissolves in rainwater and forms carbonic acid, easily weathering rocks such as marble and limestone.  Living organisms like plants naturally produce weak acids when they grow, slowly dissolving rock around their roots.  Acid rain is produced when burning fossil fuels react with water vapor in clouds, forming acid and causing rapid chemical weathering.