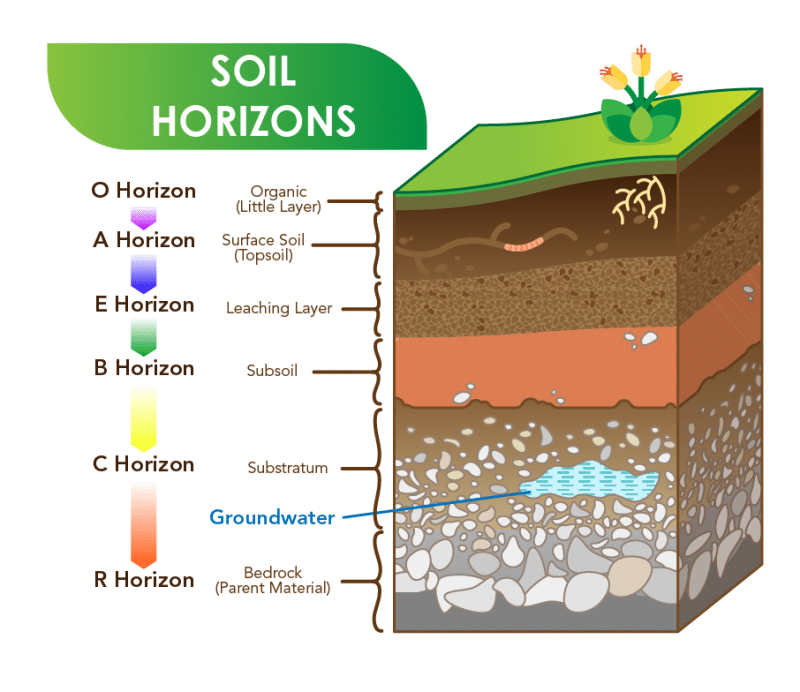 Soil is a loose mixture of rock particles, minerals, decayed organic material, air, and water in which plants can grow.  Bedrock is the soil layer of rock beneath the soil.  Once exposed, bedrock gradually weathers into smaller particles that become one of the main ingredients of soil.   Rock particles make up more than half of the soil, which contains different kinds of minerals.  Air is important in soil because it creates spaces for water to be stored.  These pockets of air also provide oxygen for animals that burrow.  Water is needed for plants to sustain life so that when it rains, water moves throughout the soil and plants absorb the water through their roots.  The organic matter in soil provides nutrients.

Humus is a dark-colored substance found in the soil from decayed organic material.  It creates space for air and water and contains nutrients plants need.  Leaves that fall on the ground are broken down, and eventually the nutrients in the leaves enrich the soil.  When soil is fertile, plants thrive.  Fertility is the measure of how well soil supports plant growth.  Loam is the soil that is made up of equal parts clay, sand, and silt.  It is best for growing most types of plants.

Soil formation occurs over a long period of time and gradually develops into layers called horizons.  Soil that is newer doesn’t have as many layers as soil that is older.  Topsoil is the “A” horizon or the top layer of soil.  It is dark brown and a mixture of humus, clay, and other material.  Many organisms live in this layer, and it provides support for plants and trees.  The subsoil, or “B” horizon, is below the topsoil and consists of clay and other particles washed down from the topsoil.  Little humus is found here.  The “C” horizon is the bottom layer containing partly weathered rock, and it has little organic material.

Soil is full of living organisms.  Some mix the soil to make room for air and water, and others make the soil more fertile.  Organisms called decomposers break down the remains of dead organisms, enriching the soil as a result.  Soil decomposers include fungi, bacteria, and worms.

Because soil is a non-renewable resource, soil conservation is very important.  When soil loses its fertility or is lost due to erosion, the effects are detrimental.  Soil conservation is the management of soil to prevent its destruction, and the adoption of certain farming practices has helped to reduce those effects.  Contour plowing reduces the impact gravity has on soil.  Farmers plow their fields along the curves of a slope to help slow runoff of excess rainfall, which may wash away the soil.  Conservation plowing is when farmers leave dead weeds and stalks from the previous year’s crops to return nutrients to the soil.  It also helps to retain its moisture and hold the soil in place.  Finally, crop rotation is when a farmer plants different crops in a field each year, which helps soil maintain its fertility.