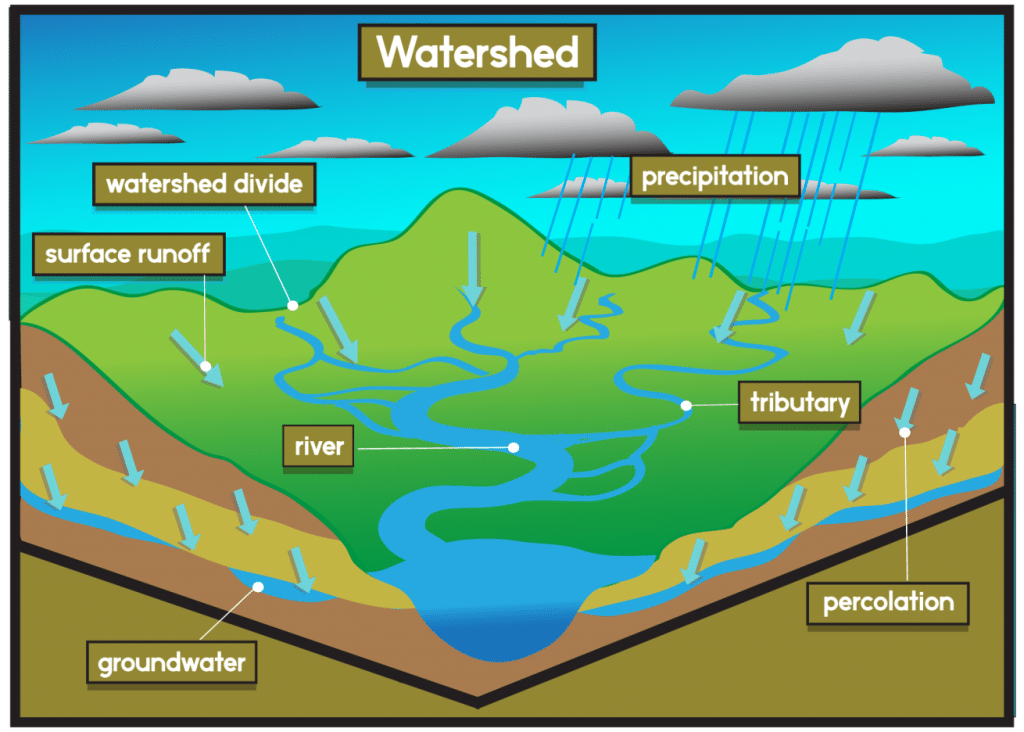 All fresh water on Earth comes from precipitation, some evaporating immediately or soaking into the soil.  The remaining is runoff or water that flows over the ground surface.  The nature of the ground surface determines whether the water will soak into the ground or flow over as runoff.  For example, there is more space in the soil than in the pavement, so water soaks into the soil more easily. The rate of rainfall also affects the amount of runoff.  As a result, water flows faster down a steep slope than on flat ground.

Rivers often shape the land by wearing away landforms due to erosion and the building of new landforms through deposition.  A river system is a river and all its tributaries or small streams.  A watershed is the land area that supplies water to a river system.  Ponds and lakes form when water collects in hollows and the low-lying regions of land.  Rainfall, melting snow, and runoff supply water to ponds and lakes.  Ponds contain diverse habitats, with bottoms often covered in weeds.  Because the water is shallow, photosynthesis enables plants to grow.  Lakes often change with the seasons.  As the water mixes due to changing temperatures, nutrients are refreshed throughout the lake.

Wetlands are areas covered with a shallow layer of water during part or all of the year.  There are three common types of wetlands called marshes, swamps, and bogs.  Coastal wetlands usually contain fresh and salt water, such as salt marshes and mangrove forests.  Wetlands offer a rich supply of nutrients for the habitats that occupy them.  Wetlands are important because they help control flooding by absorbing any extra runoff.

Glaciers are huge masses of ice and snow that move slowly over land. They are formed in areas where more snow falls each year than melts.  Glaciers form when layers of snow are pressed so tightly together that they form ice blocks.  Icebergs are broken glaciers that have caved into the oceans.  Almost 90 percent of an iceberg lies below the surface.  Glaciers make up two-thirds of Earth’s fresh water. 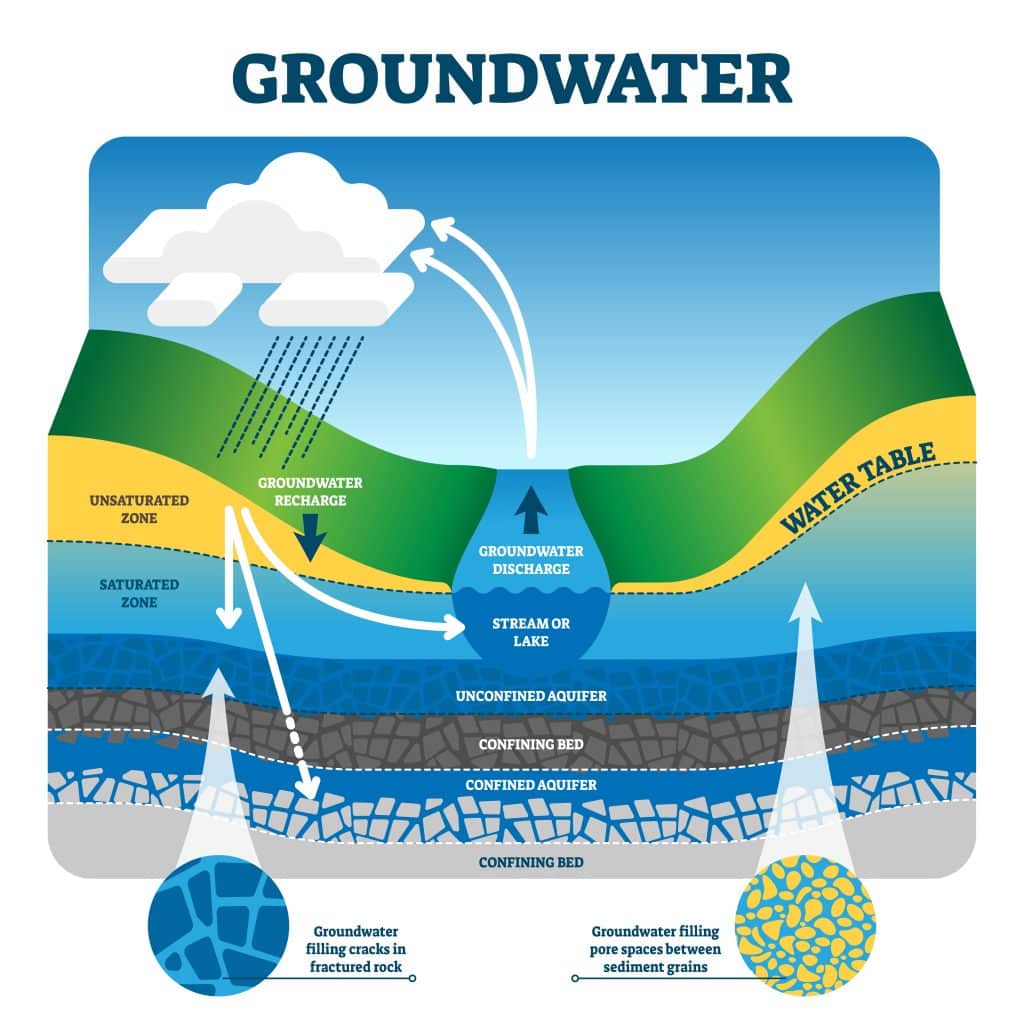 Underground water comes from precipitation that soaks into rocks and the ground between soil particles and spaces in rock layers.  Materials that allow water to pass through easily are called permeable, and materials that water cannot pass through easily are called impermeable.  A saturated zone is an area of permeable rock or soil filled or saturated with water.  The water table is at the top of a saturated zone.  The unsaturated zone contains layers of rock and soil above the water table that hold air and water. This zone isn’t able to be saturated.

The underground rock that holds water is called an aquifer.  People draw water through wells out of aquifers, which range in size.  A well is a man-made hole drilled below the water table to obtain groundwater.  An artesian well is a well in which water rises because of pressure within an aquifer.  The water is under an immense amount of pressure from the weight of the water above it.  If the top layer of rock is punctured, the pressure sends water spurting up through the hole.  A natural spring is a place where groundwater bubbles or flows out of cracks in the rock.  A geyser is a type of hot spring. It begins to rise through narrow passages as it is forced out by heated gases and steam from below.