Earth’s oceans are all connected; however, scientists separate the ocean waters into five main oceans that we recognize.  The Pacific Ocean is the largest and deepest of the oceans.  It’s larger than all of Earth’s continental land mass put together, covering about 60 million square miles.  The Atlantic Ocean is half the size of the Pacific, covering about twenty percent of Earth’s surface.  The Indian Ocean is the third largest ocean. It is located between India, Africa, and the Indonesian Islands.  Due to its location within the tropics, most of this ocean has warm surface temperatures. The Southern Ocean surrounds Antarctica and is covered by ice for part of the year.  Finally, the Arctic Ocean is the smallest and shallowest ocean. It is located near the North Pole and is also covered by ice for part of the year.

Ocean water covers seventy-five percent of the Earth’s surface.  The condition of ocean water changes dramatically from the surface to the deep ocean floor.  Salinity measures the mass of dissolved solids in a mass of water.  Seawater has an average salinity of 35 parts per thousand (ppt), so 1 kg of ocean water contains about 35 g of salt.  The salinity of water is also saltier in warmer water than in polar water since it evaporates faster, which leaves behind more salt at the surface.  Temperature also changes from the surface to about 1000m, depending on whether it is located in polar or tropical regions.  Water near the surface is affected by the weather and is typically warmer.  In the deep zone of the ocean, the water is frigid.  The pressure of water also increases as you descend through the water.  The density of seawater is related to both salinity and temperature.  Ocean water is layered, meaning the densest layers are on the bottom, and the least dense layers are on the top.  Since cold water is denser than warm water, salt water is denser than fresh water.  This results in seawater having greater buoyancy. 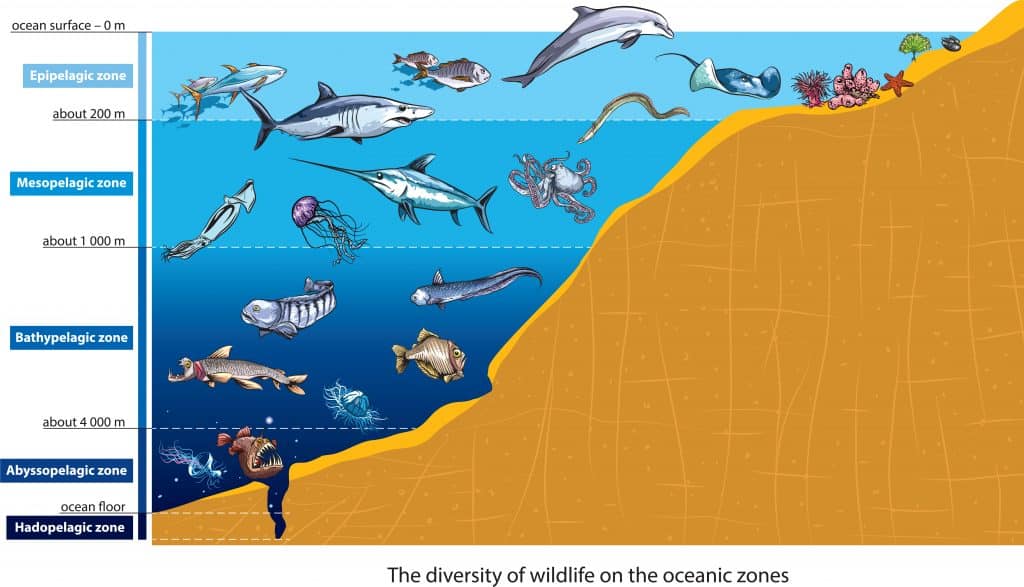 Oceans are divided into zones based on physical characteristics, including sunlight, temperature, salinity, and density.  The surface zone is an area of shallow seawater that receives the most sunlight.  Organisms that perform photosynthesis are located here because it’s the only open ocean part that gets enough sunlight to support growth.  Most marine animals, such as whales, sharks, and jellyfish, are in the surface zone. The middle zone receives very little sunlight and only the blue-green wavelengths.  The deep zone contains no light and becomes darker and colder as you descend.  Plants that photosynthesize are not found here because there is no light.  Many organisms produce light using chemicals in a process called bioluminescence.  Animals in this zone must be good hunters to survive because there are limited resources.