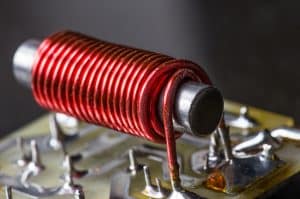 Electricity and magnetism are often closely related.  Electromagnets are temporary magnets made by wrapping a wire coil carrying a current around an iron core.  You can increase the strength of the magnetic field by adding more turns to the wire coil (called a solenoid) or by increasing the current passing through the wire.  A simple electromagnet can be seen in a battery, paper clips, and a nail.  If the wire is wrapped around the nail, electricity flows through the wire, and then the nail can now pick up the paper clips.  An advantage to an electromagnet is that its magnetic field is much stronger than a permanent magnet and the current can be stopped.

An electric motor is a device that changes electrical energy into mechanical energy.  In a simple electric motor, an electromagnet rotates between the poles of a permanent magnet.  A toy car can be powered by an electric motor connected to a battery.  The current is used to produce a force that is able to turn the wheels of a car.

In a direct current, the current flows in only one direction through a wire.  The current’s strength cannot be increased or decreased.  A battery is an example of a direct current.  An alternating current reverses the direction of the current flow in regular patterns.  The current’s strength can easily be increased or decreased.  Plugging a toaster into a wall outlet is an example of an alternating current.