Section 1: The Study of Earth Science 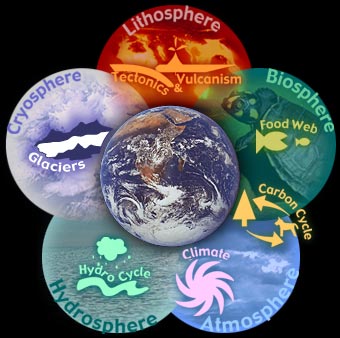 A system is a group of parts that work together as a whole.  Matter and energy are constantly moving from one part of the Earth system to another.  Earth’s systems include the atmosphere, lithosphere, cryosphere, hydrosphere, and biosphere.  The atmosphere is a thin layer of gases that surround our planet.  It allows for varied climate or long-term weather conditions.  The lithosphere is a solid part of the Earth that is made up of rocks, minerals, and other elements not including the ocean.  The hydrosphere is made up of all the water on Earth’s surface, including lakes and oceans, and even the water over its surface like clouds.  The hydrosphere is a major force that shapes weather and climate.  The biosphere is the part of the planet where living things can be found from the upper atmosphere to the bottom of the oceans.   The cryosphere includes the parts of Earth’s surface where water is in solid form. It includes frozen water, sea ice, glaciers, and frozen ground.

Earth scientists study the sphere on which we live, which includes several branches.  Geology is the study of forces that have shaped Earth.  A geologist studies how rocks and minerals form.  They study the causes of earthquakes and how volcanoes are formed.  Some specialize in the study of soil, and some study rivers and lakes.  Oceanography is the study of everything ocean related, including the chemistry of the ocean water, the ocean floor, and marine organisms.  Some scientists study the physical properties of oceans like waves and ocean currents.  Others study the composition of ocean water and marine life.  Meteorology is the study of conditions in the atmosphere.  A meteorologist looks at weather patterns and uses radars and satellites to predict the weather.   Astronomy focuses on the solar system, stars, and galaxies.  An astronomer uses telescopes and satellites to see things in space.  They study planets and the universe as a whole.    Environmental science is the study of the Earth’s environment and resources.  It looks at the effects people have on the environment and finds ways to minimize the negative effects we have on the environment.