DNA can be found everywhere.  It’s found in our blood, skin cells, hair cells, and bodily fluids.  Chromosomes contain DNA that houses small rodlike structures like genes.  A gene is a section of a DNA molecule that contains the information to code for one specific protein, which means genes carry information that determines the characteristics of a cell and the instructions for making new cells.  DNA stores, copies, and transmits genetic information in a cell.

DNA is a nucleic acid made of nucleotides that are joined into long strands.  It’s DNA’s instructions that determine traits.   Four kinds of nitrogen bases are found in DNA: adenine, thymine, guanine, and cytosine.  The order of the nitrogen bases along with a gene forms the genetic code that specifies what type of protein will be produced.  RNA, ribonucleic acid, is the genetic messenger that carries genetic code from the DNA inside the nucleus into the cytoplasm.  RNA essentially carries out DNA’s plans.  RNA also has the bases adenine, cytosine, and guanine, but instead of thymine, it contains uracil.

There are two types of RNA.  Messenger RNA copies coded messages from DNA and carries messages to the ribosomes in the cytoplasm.  The instructions it carries are for making a protein.  Transfer RNA molecules are much smaller and play a simpler role.  While messenger RNA carries the plans for the protein, the transfer RNA picks up and carries amino acids to the ribosome and adds them to growing proteins.

During protein synthesis, first, the genetic information in the DNA is transcribed to the messenger RNA (mRNA) strand.  Secondly, messenger RNA (mRNA) leaves the nucleus through nuclear pores and attaches to a ribosome. The mRNA provides code for the protein molecule that will form. Then, transfer RNA (tRNA) attaches to the mRNA.  Next, transfer RNA (tRNA) carries specific amino acids to the ribosome.  There they “read” the message of mRNA by matching up codes of bases.  Next, the amino acids link together forming a protein, or polypeptide chain, determined by the order of codes on the mRNA. Finally, the ribosome releases the completed protein, which is either used by the cell or is packaged and exported. 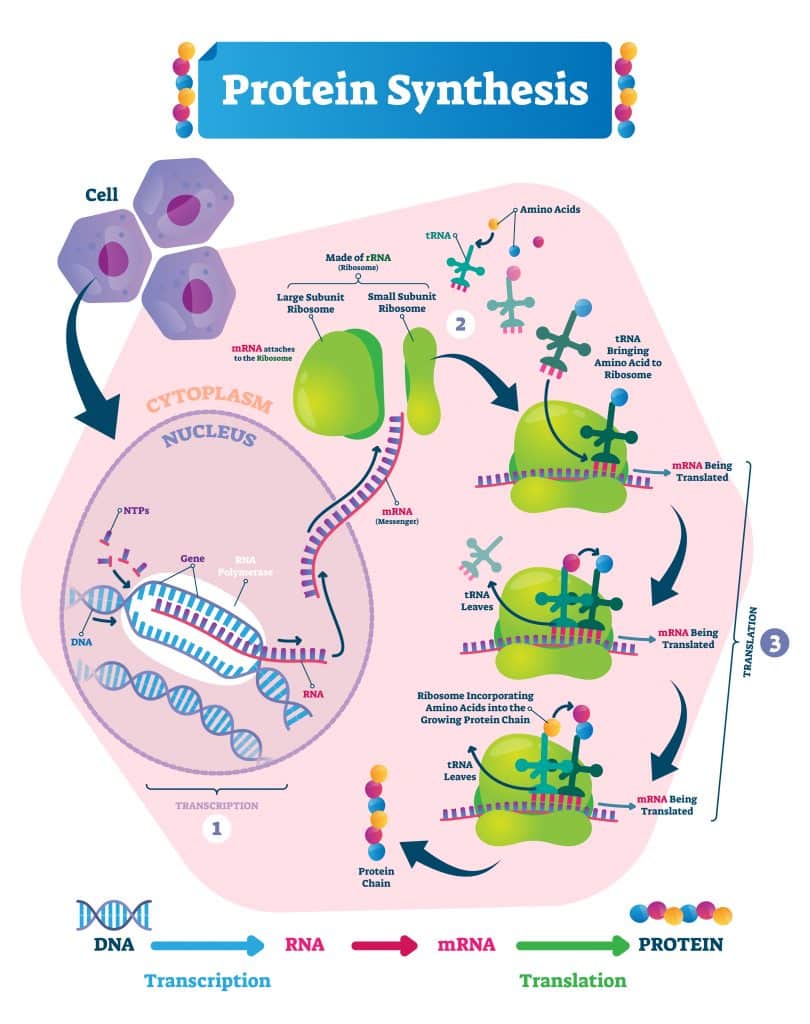 A mutation is any change in a gene or chromosome.  A parent cell makes an error in copying its DNA, and as a result the daughter cell will have DNA that is different from those of the other cells.  This mutation will continue to pass on to its daughter cells when it divides.  Mutations can occur in various ways.  Substitution is when one base is substituted for another.  Deletion is the removal of one or more bases, leaving a missing segment in the chromosome.  Addition involves the adding of one chromosome to another unrelated chromosome.