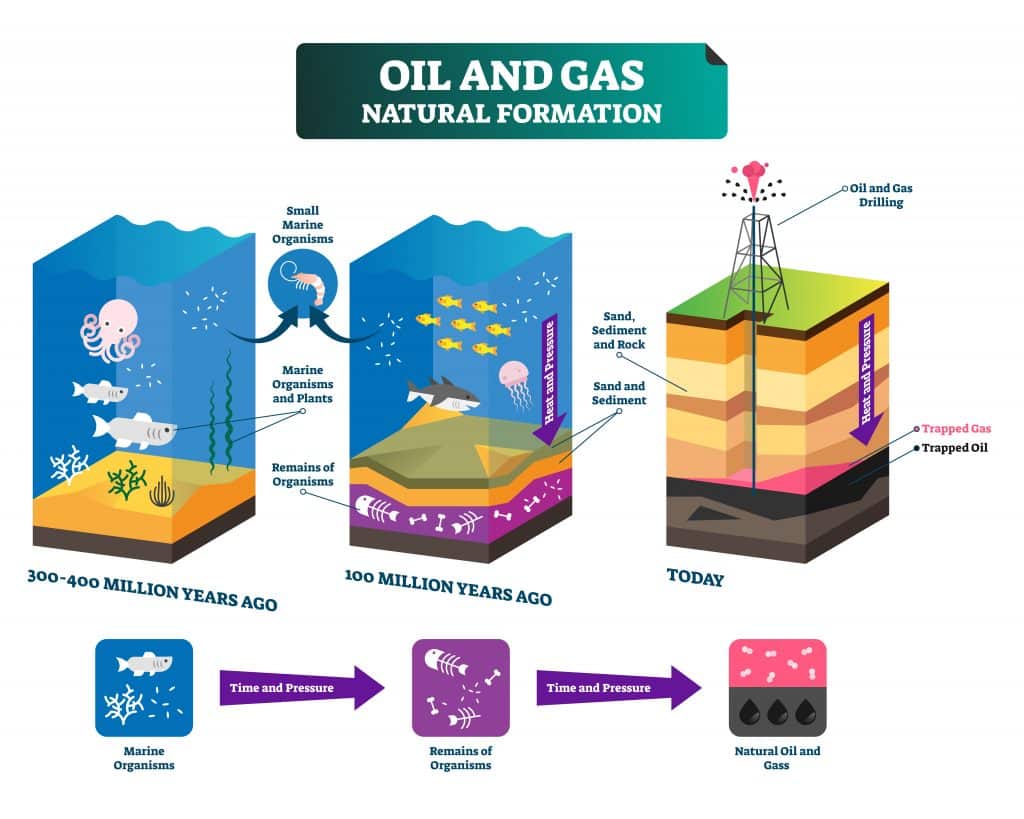 Time line from million years ago to today.

Natural resources are materials that exist in nature and are used by humans, such as mineral, energy, and water resources.  Most energy sources are non-renewable, meaning they are used up faster than natural processes can replace them within a human time scale.  The fossil fuels we use today were formed from the remains of plants and animals buried and chemically changed millions of years ago.  Fossil fuels such as coal, oil, and natural gas are allnon-renewable resources.  Coal is the most abundant fossil fuel.  It’s a rock that contains at least 50% plant remains.  Oil is a thick, black, liquid hydrocarbon, and it’s sometimes called petroleum.  Oil is formed from the buried remains of microscopic marine organisms.  Natural gas is a gaseous hydrocarbon that often forms above oil since gas is a lighter molecule.  Fossil fuels are removed from the ground through mining and pumping.  As a result, the current reserves, or the amount that can be extracted, are decreasing rapidly.

Another non-renewable energy source is nuclear energy.  Nuclear energy is an alternate energy source produced from the fission or splitting of uranium atoms.  First, uranium atoms are split, which releases thermal energy.  Then, the thermal energy heats water, producing steam.  Next, the steam turns into a turbine connected to a generator and finally, electricity is produced as the generator spins.  This generally produces a large amount of energy, and a well-run nuclear power plant doesn’t pollute the air, soil, or water.  However, if a nuclear power plant produces highly radioactive nuclear waste and gets out of control, it can harm the environment.  The generated waste must be stored and contained for at least 10,000 years.

Like coal, certain minerals are mined to make valuable products.  Mineral resources are deposits of useful minerals.  These minerals are called ores, which are deposits where minerals exist in quantities large enough to extract to be used for a profit.  Non-metallic mineral resources are materials that are not used as fuels or as sources of metals.  Industrial minerals include sandstone, used in glass; halite, used in table and road salt; and garnet, used in sandpaper.  Building materials include aggregate used in concrete, gypsum used in plaster and wallboard, and stone like granite, limestone, or sandstone.