In 1915, a German scientist named Alfred Wegner hypothesized that at one time, all of the continents were once joined together in a single landmass, which he named Pangea, meaning “all lands.”  He theorized that they had since drifted apart, also known as continental drift.  Wegner gathered evidence to support his hypothesis.  First, he used evidence from land features such as mountain ranges and coal fields that matched up on different continents when pieced together.  Secondly, he used evidence from fossils, or traces of ancient organisms preserved in rock, to show the same animals and plants existed on the now separated land masses.  Finally, evidence from climate change helped Wegner show that there were scratches on rocks made from glaciers in places with much milder climates than today.  In addition, climate evidence shows flora and fauna fossils that could have only survived in different temperatures and environments. 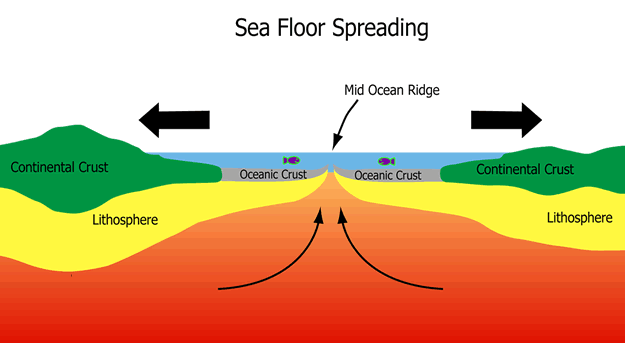 Wegner could not provide a satisfactory explanation for the push or pull of the continents; therefore, his hypothesis was rejected.  That is until an American geologist named Henry Hess proposed the radical idea of seafloor spreading: the creation and destruction of the ocean floor.  Seafloor spreading occurs when the sea floor spreads apart along both sides of a mid-ocean ridge as new crust is added.  As a result, ocean floors move like a conveyor belt, carrying continents along with them.

Support for Hess’s theory of seafloor spreading included evidence from molten material, magnetic stripes, and drilling samples.  First, pillow-shaped rocks found on the ocean floor could only have formed when molten material hardened quickly after erupting underwater.  Instead, these rocks showed that molten material continuously erupts along the mid-ocean ridge.  Next, scientists found evidence from magnetic stripes or rocks in a pattern showing a record of reversals of Earth’s magnetic field.  Finally, scientists collected evidence from drilling samples, revealing that the farther the rocks were taken from a ridge, the older they were.

Eventually, the ocean floor sinks into deep underwater canyons called deep-ocean trenches, where subduction occurs. This allows part of the ocean floor to sink back into the mantle over tens of millions of years.

Print
← Section 2: Convection in the Mantle Section 4: The Theory of Plate Tectonics →