The process through which water, carbon, nitrogen, and phosphorus are recycled through the ecosystem is called a biogeochemical cycle, powered by the flow of energy.  During this process, matter is recycled between and within the ecosystem connecting the biological, geological, and chemical aspects of the biosphere. 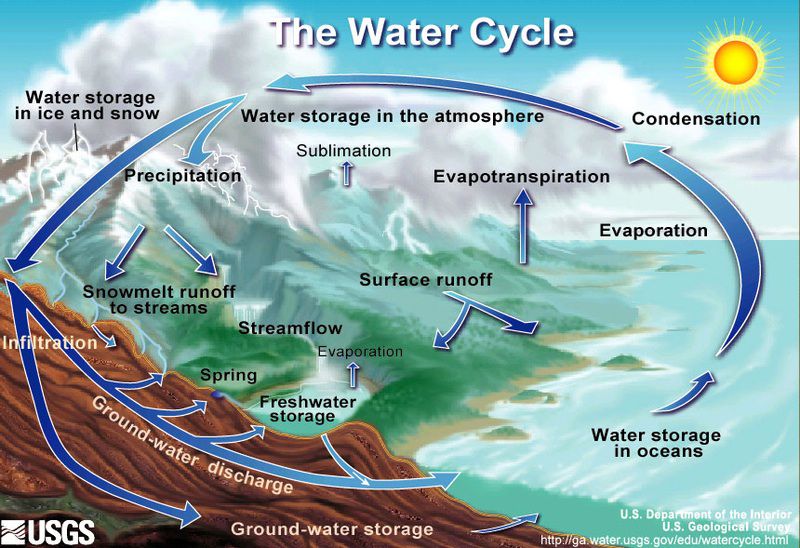 In the water cycle, water is continuously moving between the atmosphere and earth, between the living and nonliving parts of an environment.  Sun is the energy source that drives the water cycle, which includes evaporation, condensation, and precipitation.  During the water cycle, water evaporates from lakes and oceans. Then, the water vapor condenses and makes clouds.  After even more condensation, drops of water form and fall back to Earth as precipitation in the form of rain, ice, or snow.  Plants also pull in water through roots through the process of transpiration, which puts water vapor back into the air. 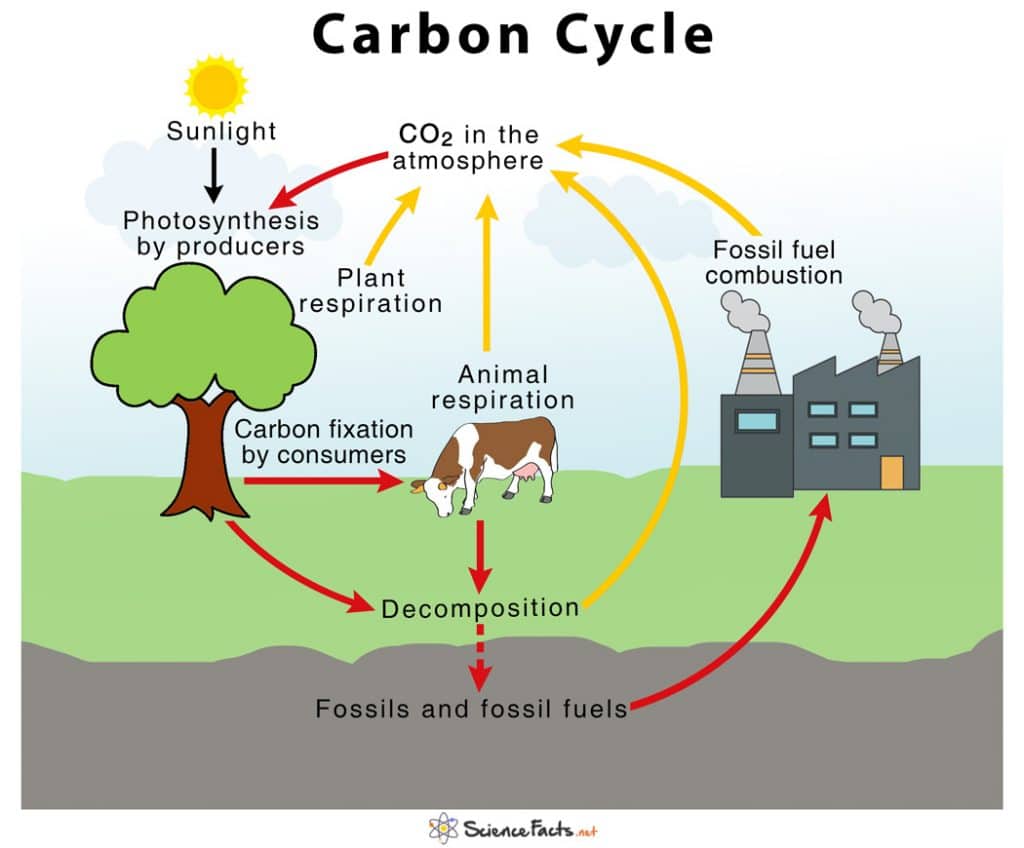 All life is based on carbon, and all living things need it.  Carbon cycles between living organisms and the atmosphere.  In photosynthesis, autotrophs use the sun’s energy to change CO2 gas into energy-rich forms of carbon.  Heterotrophs then feed on autotrophs using the carbon for growth and energy.  As both use carbon, they release CO2 back into the air.  Carbon is found in soil through erosion and volcanic activity as well as in coal, oil, and natural gas, which are fossil fuels.  The mining, cutting, and burning of fossil fuels contribute to global warming. 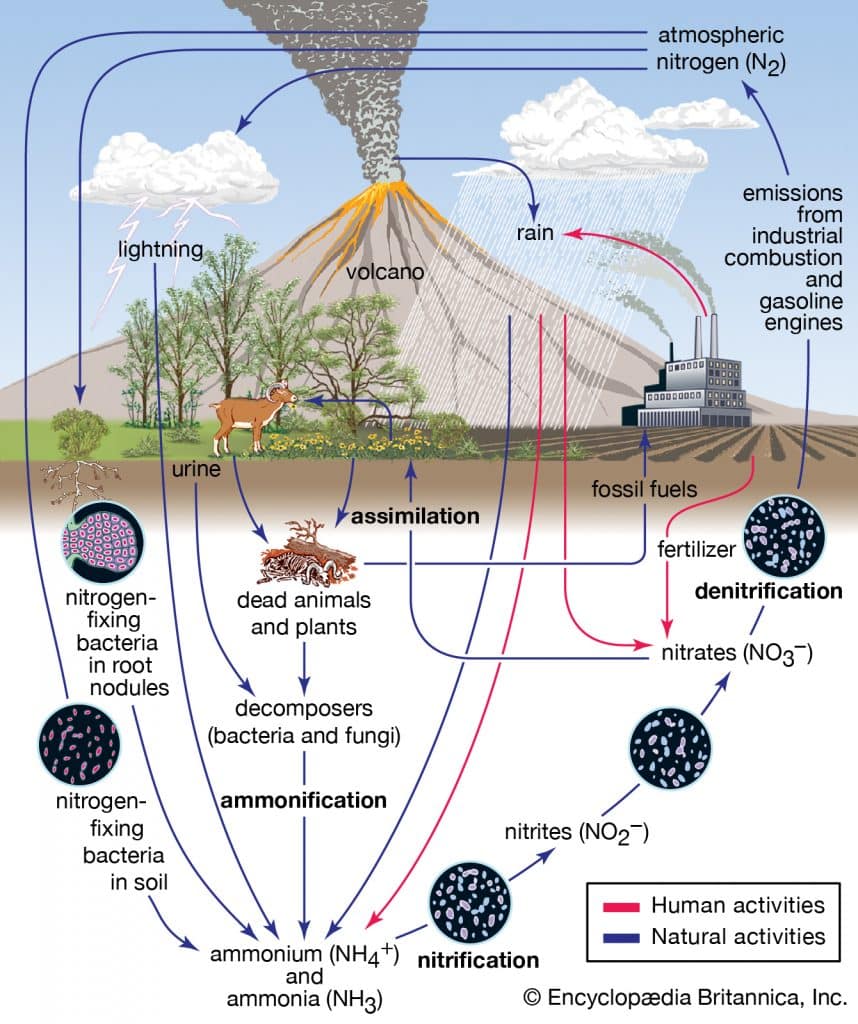 Like water and carbon, nitrogen is also continuously being recycled. About 78% of air is nitrogen, but plants cannot use it in this form, and so there are bacteria in the soil that can change the nitrogen to a form that plants can use to make proteins.  Animals can then eat the plants and change the plant proteins into animal proteins. These proteins are used by animals in building muscle and blood cells.  When organisms die, the nitrogen returns to the soil, cycling it through the soil and tissue of living organisms. 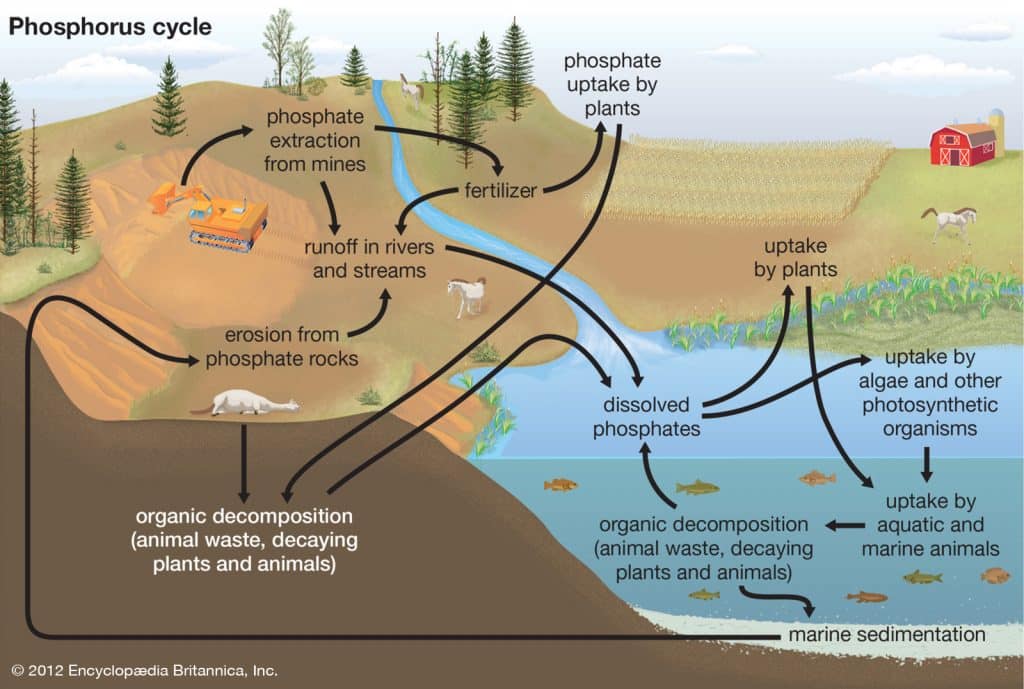 The phosphorus cycle in the biosphere cycles among the land, ocean sediments, and living organisms.  Phosphorus is an element that all organisms need, but it does not enter the atmosphere in significant amounts.  It cycles in two ways. Plants get it from the soil, and animals get phosphorus from eating those plants. When the animals die, decaying bodies release phosphorus back into the soil for it to be used again.  It is also found in rocks.  Over time, erosion occurs, releasing phosphorus back into the environment.