Biomes are large ecosystems that share the same type of climax community.  Each biome is defined by a unique set of abiotic factors, particularly climate, and biotic factors like a diverse group of plants and animals.  Each biome has a seasonal pattern and organisms with adaptations that enable them to live and reproduce.  Biomes located on land are terrestrial biomes, and biomes located in bodies of water are known as aquatic biomes.  Aquatic organisms are affected by depth, temperature, and availability of nutrients.  The sunlit area in which photosynthesis occurs is called the photic zone.  Phytoplankton live here.  In the aphotic zone no light penetrates, so there is no photosynthesis.

Water makes up the largest part of the biosphere, covering approximately 75% of Earth’s surface.  The aquatic biome can be broken down into two basic regions: freshwater and marine.  A freshwater biome has a low salt concentration of less than 1%.  Ponds and lakes, streams and rivers, and wetlands are all freshwater biomes. 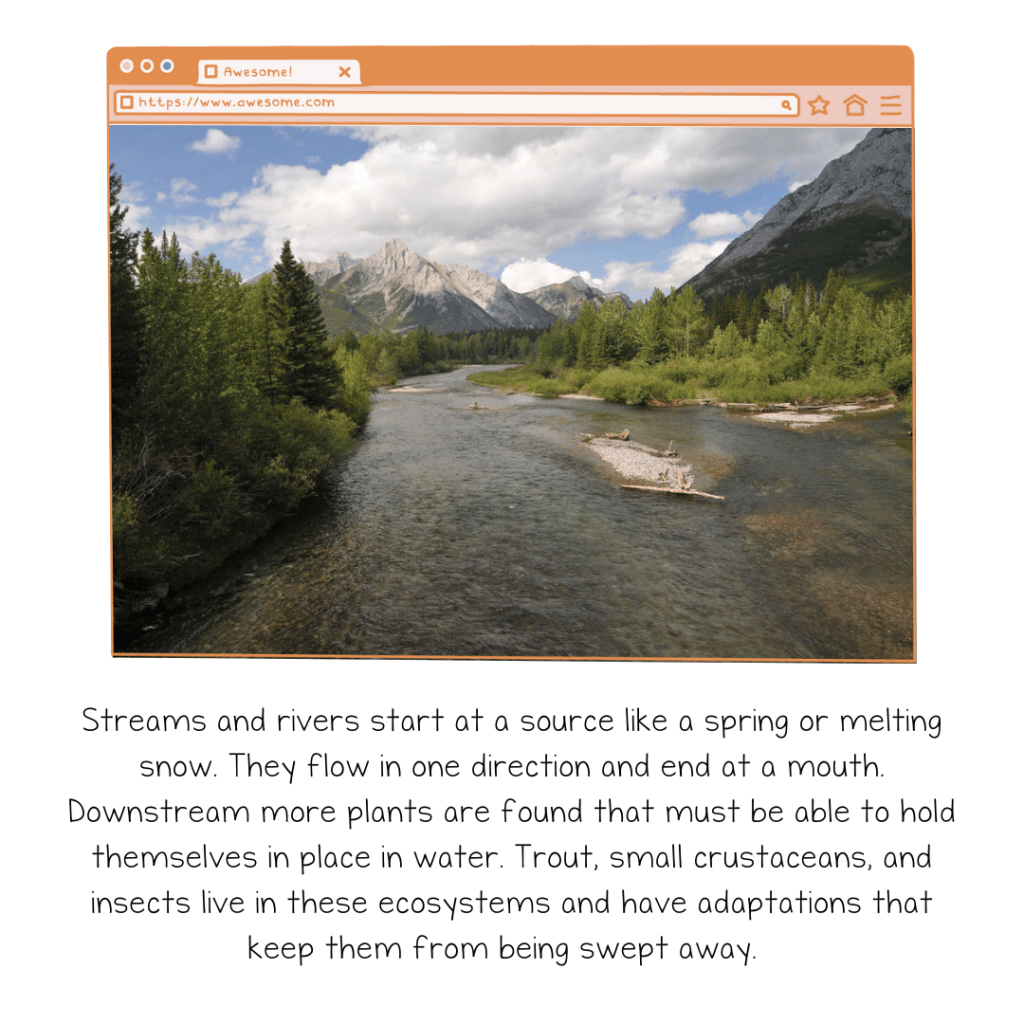 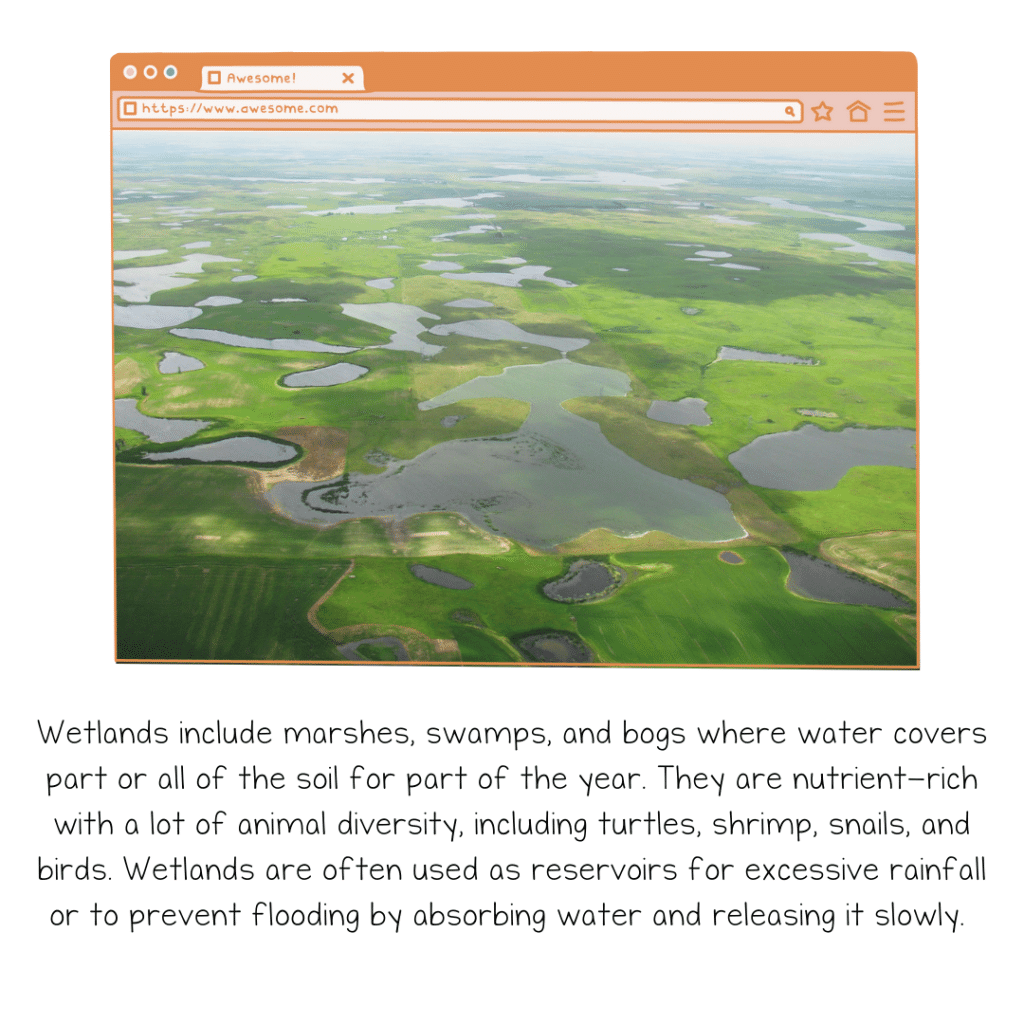 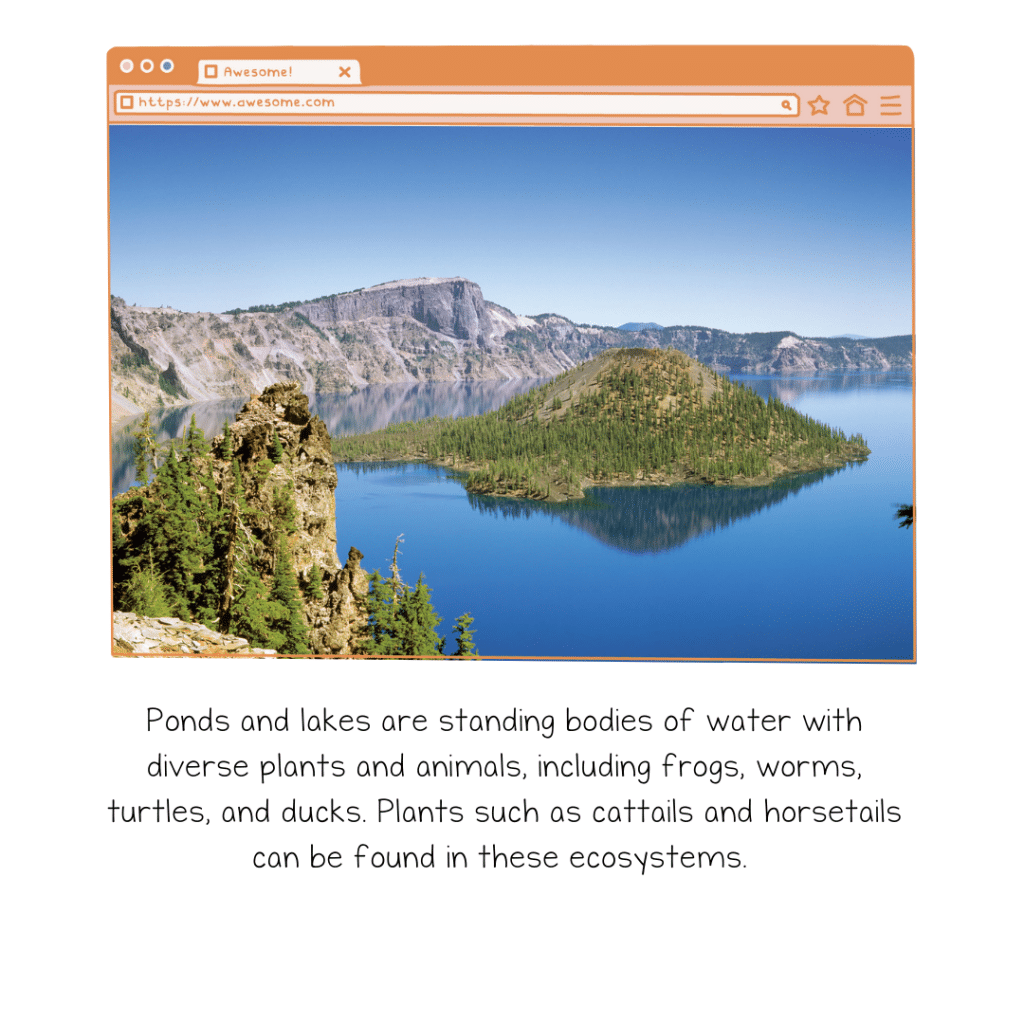 A marine biome covers about three-quarters of the Earth’s surface and includes oceans, coral reefs, and estuaries.  In an ocean ecosystem, organisms must be adapted to living in salt water.  Tropical oceans are warm and polar oceans are cold and often frozen at the surface.  The ocean is divided into different zones based on depth and distance from the shore with different species flourishing at each zone. 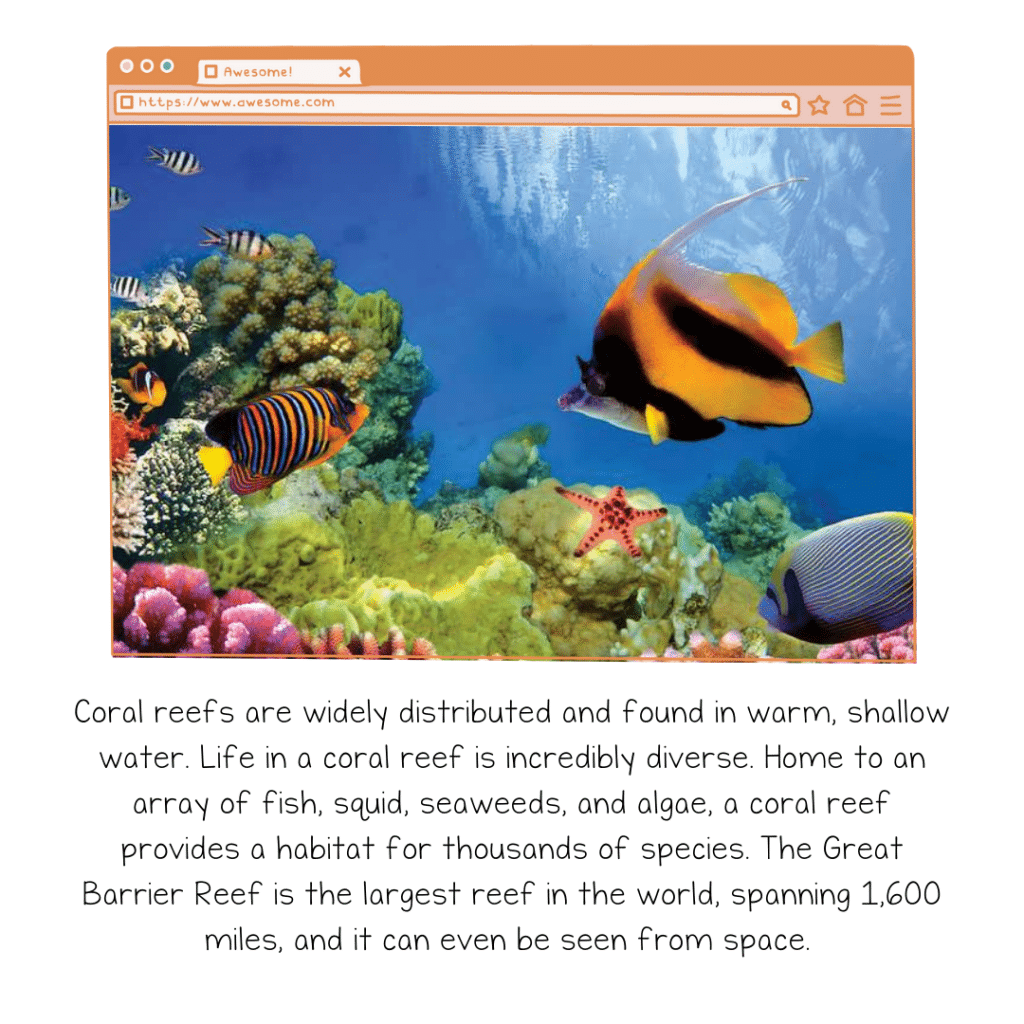 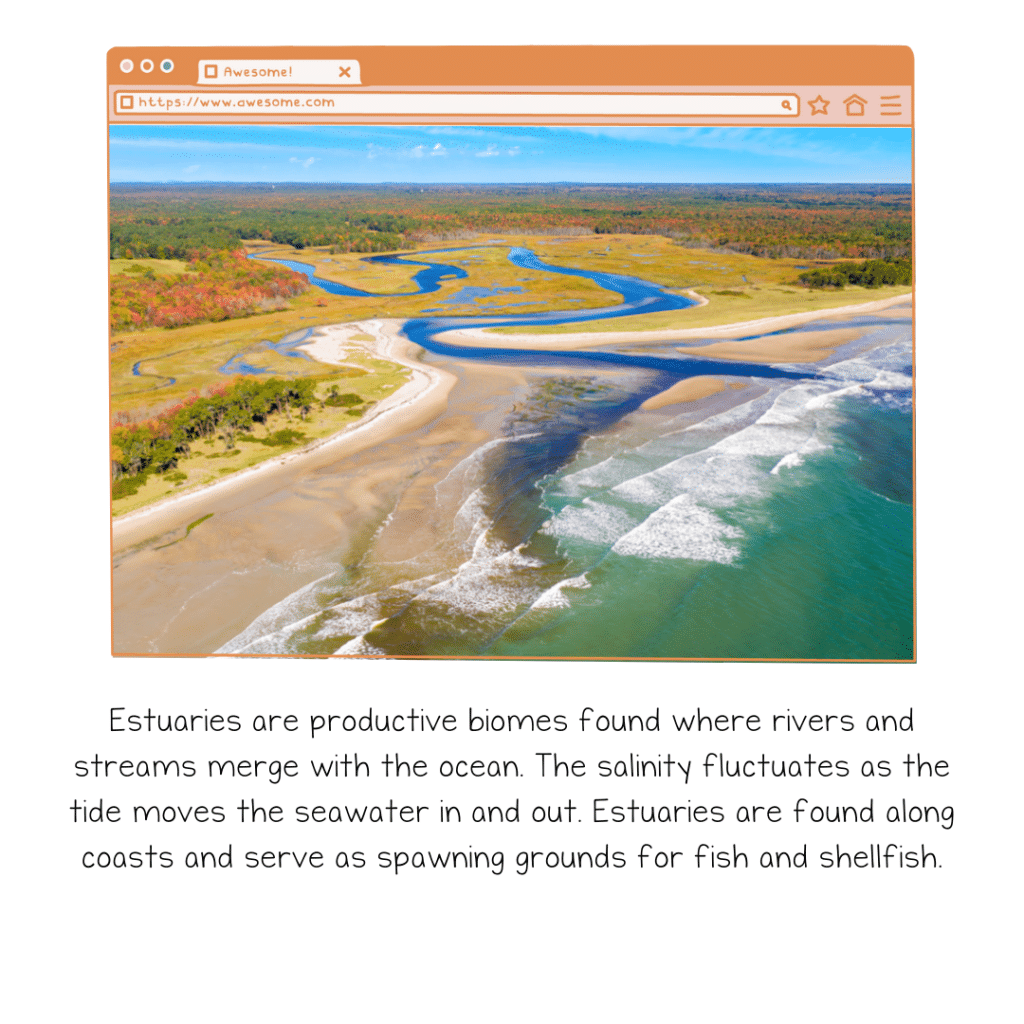 Terrestrial biomes vary greatly and are often characterized in terms of their plants and animals.  Climate influences the type of climax community that develops in the area.  The most common terrestrial biomes that result from climate differences are tundras, taigas, deserts, savannahs, temperate forests, and tropical rainforests.

The tundra is the coldest biome and is known for its permafrost, or permanently frosted landscape.  It has a short season of growth, so the plants are small and stunted.  Low growing plants like mosses are adapted to growing in poor soil.  Caribou, polar bears, and arctic fox live in the tundra, but many animals migrate to avoid the harsh winters.  The taiga is the largest land biome found in the northern part of the Northern Hemisphere.  Often called the boreal forest, it consists mostly of pines and spruces.  It has a short growing season; long, cold winters; and short summers.  Grizzly bears, lynx, and owls live here.  Many animals here hibernate and have thick fur and feathers providing extra insulation.

The desert biome is characterized as hot and humid with little rainfall.  Rocky soil covers most of the terrain.  The temperature fluctuates, and while it can be quite hot during the day, it is often quite cold at night.  Even with limited availability of nutrients, there is an abundance of animals that live in the desert, like lizards, bobcats, and snakes.  Many are nocturnal.  Most of the plants and animals found in the desert have developed adaptations for conserving water and staying cool during the hot temperatures.   Cacti have shallow, widespread root systems that allow them to absorb a lot of rainwater quickly and then store it in their stems.

The savanna is warm year-round and is dominated by grasses and trees scattered throughout.  It receives a limited amount of rain, making plants adapt to growing during periods of drought.  The rich volcanic soil supplies nutrients necessary for growing grasses, which are the main food source for animals in the savanna.  In Africa, giraffes, antelope, and zebras can be seen grazing in wide open grasslands. Insects and burrowing animals are also found in this biome.

Temperate forests, found in the Northern Hemisphere, have a temperate climate, cold winters, warm summers and a lot of rain.  The soil is fertile, allowing for a wide variety of plant growth.  Trees can live for hundreds of years and provide great habitats for the deer, squirrels, and birds that live among them.  Some animals migrate and some hibernate.  Mosses and wildflowers are also found throughout temperate forests. 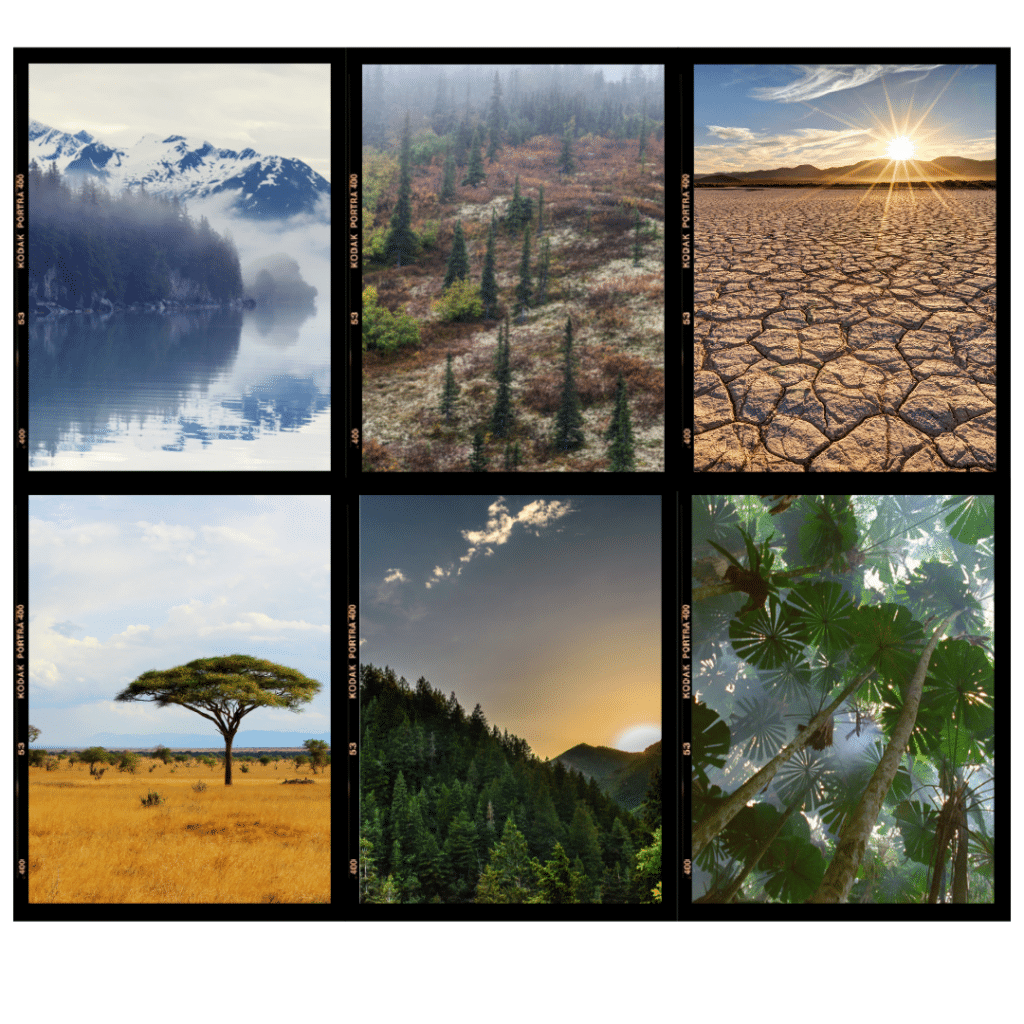