Igneous rocks are the most common rocks found on Earth.  They form on or beneath the Earth’s surface as magma rises and cools on the surface.  When magma cools and hardens, it is called crystallization.  If magma cools slowly and hardens underground, the rock formed is called an intrusive rock because the magma pushes into the crust.  When magma erupts at the surface of the Earth, it’s called lava.  Extrusive rocks are igneous rocks that form from lava that has erupted onto Earth’s surface.  If a rock is small with crystals that are hard to see, it is extrusive.  If a rock is large and interlocking, then it is intrusive.

Geologists determine whether an igneous rock is extrusive or intrusive based on its texture.  They look at the shape of the crystals that make up the mineral’s grains.  Rocks can be coarse, medium, or fine grained and sometimes a combination.  Igneous rock often contains grains that are characterized as being either coarse or fine, depending on whether they develop deep in the crust or at the surface.  Granite is an intrusive igneous rock that has large crystals, and it is usually pale pink or gray in color.  Obsidian is an extrusive igneous rock that is black and glassy.  You cannot see its crystals because it forms from lava that cooled very quickly on the Earth’s surface. 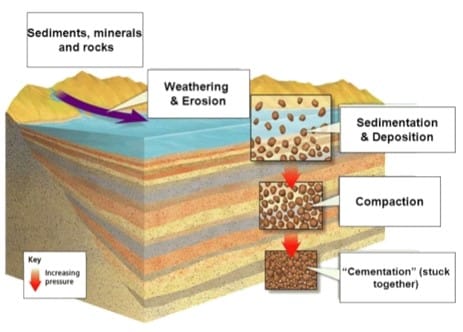 Sediment is small, solid pieces of material that come from rocks or remains of living things such as shells, leaves, bones, and stems.  Sedimentary rocks are mostly formed through a series of processes.   Erosion is when wind and water scrape away at rock until tiny bits of it fall off.  The sediment particles are then carried away from their source.  Sometimes rain or heavy winds start to erode rock and change its shape.  Deposition is the process by which sediment settles out of the water or wind carrying it.  Sediment is continuously being compacted as new layers pile on top of it.  Compaction is the process that presses sediment together, growing thick layers that build up over millions of years.  Cementation is the process in which dissolved minerals crystallize and glue particles of sediment together.  Sometimes dead plants or animals fall onto sedimentary rock, and this is how fossils can form.

Sedimentary rock can be classified into two groups according to its composition and how it forms.  Rocks that are broken into pieces of minerals and rock fragments are known as clastic rocks, such as sandstone.  When minerals crystallize directly from water, like limestone, chemical rocks form called non-clastic rocks.  Chemical rocks are generally composed of one dominant mineral and are uniform in color.  Biochemical rocks are sedimentary rocks that were formed by organisms or contain the remains of organisms, like coal.  Sedimentary rocks are made of fragments of other rocks cemented together.  They have a wide range of grain sizes from a microscopic piece of clay to a huge boulder.

Metamorphic rocks often look similar to sedimentary rocks, but they are classified into two groups depending on whether they have bands or not.  Foliated rocks have bands of different mineral grains arranged in layers.  If a rock is nonfoliated, the mineral grains are arranged randomly.  Many of these rocks show signs of distortion or blending due to extreme heat and pressure during the rock cycle.  Gneiss is a foliated metamorphic rock that forms from mudstone, which is an igneous rock.