Although we can’t see it, when a moving object travels through air, it causes vibrations, and as a result, we hear sound.  We rely on sound to give us information about the world around us, and we use it to communicate with one another.  Sound waves are compressional waves formed when vibrating objects collide with air molecules.  The speed at which sound travels depends on the temperature and state of the medium.  Sound travels faster in solids and liquids because molecules are closer together than they are in gas molecules.  As the medium temperature rises, molecules move faster and conduct sound waves faster.  Sound moves faster through water than through the air because water particles are closer together. 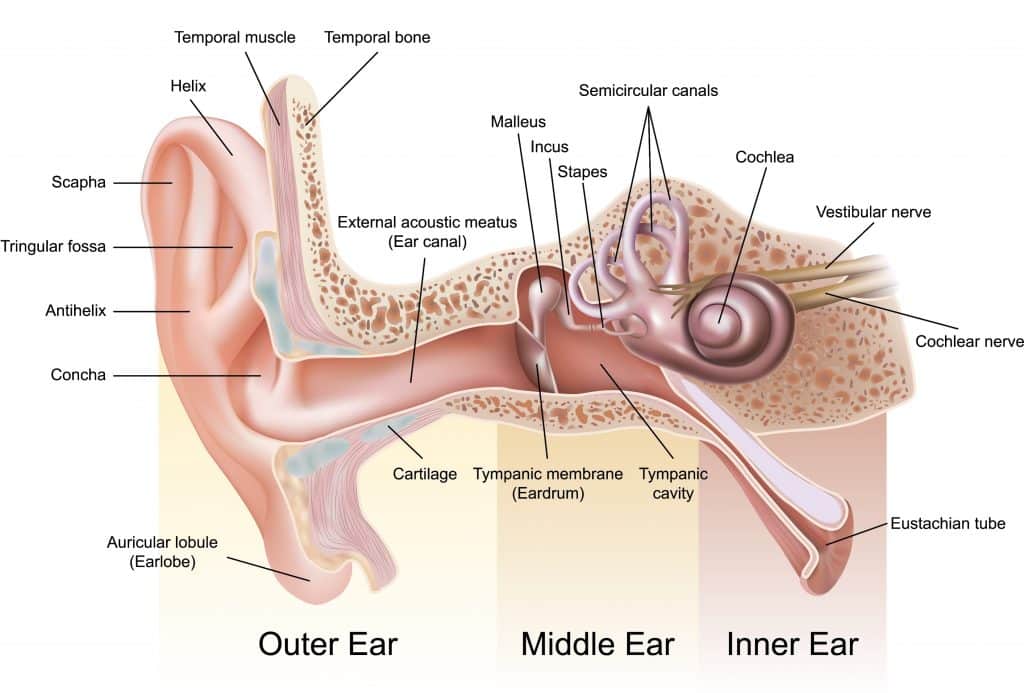 Our ability to pick up vibrations in the air and change them into sounds begins with our ears.  First, the outer part of the ear serves to “catch” the compressional sound waves.  Because it is cupped and has many curves, it can help you determine the direction of the sound wave. The sound waves travel into the ear canal and vibrate the eardrum, which is a thin, cone-shaped piece of skin.  Next, the sound wave is amplified by three bones in the middle ear called the hammer, anvil, and stirrup.  Then, the inner ear, which contains the cochlea, vibrates sending auditory nerve impulses to the brain.  Finally, those impulses are collected by the cerebral cortex of the brain where they are interpreted.

Loudness is the human perception of sound intensity, which is measured in units called decibels.  Intensity is the amount of energy that flows through a certain area in a given amount of time.  Sound waves with high intensity carry more energy.  When high-intensity sound waves reach your ear, they cause your eardrum to move back and forth at a greater distance than it will move with low-intensity sound waves.  As the intensity of a sound wave increases, the loudness of the sound you hear increases.  A human can tolerate sound intensity of around 120 dB before pain and permanent hearing loss can occur.  Damage can also occur if there is long exposure to sounds greater than 85 dB.

Pitch refers to how high or low a sound seems to be when it’s related to the frequency of a sound wave.  High-frequency waves produce high-pitched sounds.  Bats are able to hear much higher sounds than we can, and they use sound to find their way around dark caves.