Protists are eukaryotes that cannot be classified as plants, animals, or fungi.  There are protozoans that are animal-like protists, plant-like protists, and fungus-like protists.  They are all unique in how they obtain energy, move, and reproduce. 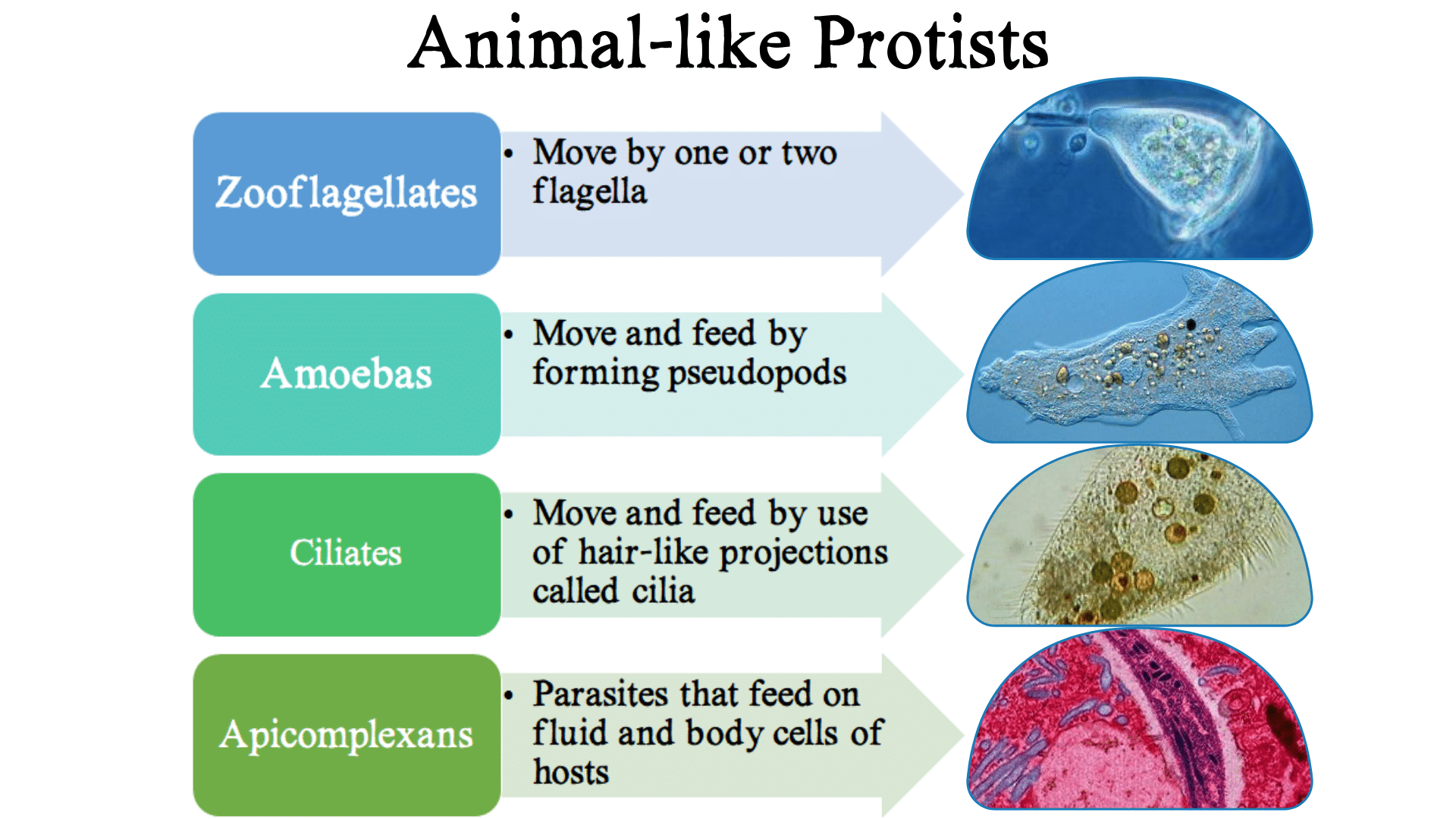 Protozoans are animal-like protists that are extremely diverse and are found everywhere.  They are heterotrophs that lack a cell wall and inhabit most aquatic environments.  They eat bacteria and other protists.  Protozoans can also be classified by how they move.  Some change their cell shape, some have specialized organelles, and some do not move at all but are carried by other organisms.  Zooflagellates can be free-living or parasitic protozoans that move by means of one or more flagella.  Amoebas are a group of protozoans that move and feed by forming pseudopods, or “false feet.”  They are essentially temporary bulges of the cell that helps them move.  Ciliates are named for their use of hair-like projections called cilia to move and feed.  A paramecium swims by moving its cilia in a wave-like motion, which propels the organism along and sweeps food particles into it as well.  Protozoans called apicomplexans are parasites that feed on the cells and body fluids of their hosts. 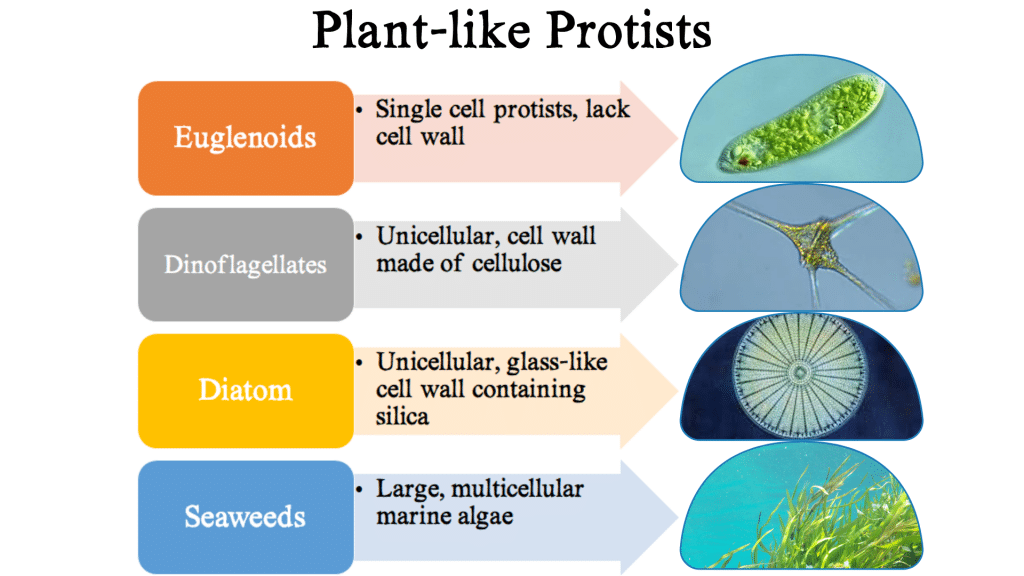 Algae are plant-like protists.  Protists that are photosynthetic are grouped together as members of algae.  They contain chloroplasts and can make their own food.  Most algae live in water or damp, moist areas.   Many algae are unicellular, living in colonies, and others are multicellular.  They are characterized by having a cell wall, photosynthetic pigments, and structure.  Euglenoids are single-celled protists that have one or two flagella and lack cell walls.  Dinoflagellates are unicellular and photosynthetic with a cell wall made of cellulose and two flagella.  They are commonly found in communities of organisms that drift in aquatic environments.  A diatom is autotrophic and unicellular with a glass-like cell wall containing silica.  A diatom has an intricate shell that fits together like the top and bottom of a box.   Seaweeds are large, multicellular marine algae and can be brown, red, and green.  The majority of algae is phytoplankton, which are unicellular organisms that are the basic food of animals in oceans, rivers, and lakes. 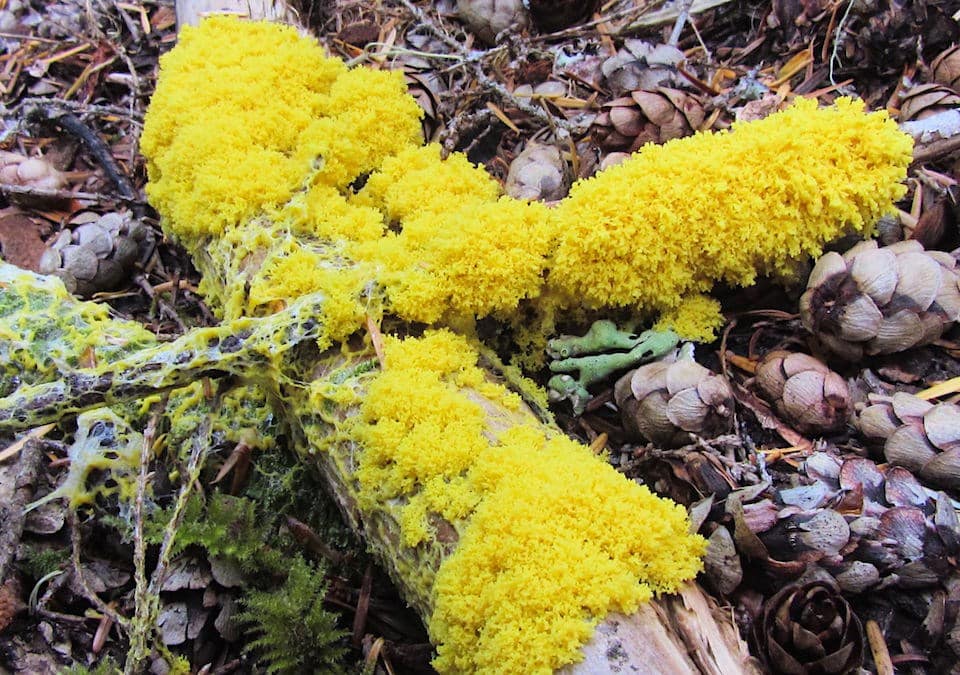 Slime molds, water molds, and downy mildew are all fungus-like protists.  Mold refers to a rapidly growing fungus that reproduces asexually by producing spores. They are heterotrophic with a cell wall and have reproductive cells called spores that can grow into a new organism. They absorb nutrients from decaying matter.  Slime molds are vibrant in color and are often found on rotting logs.  Water molds are found in moist soil and on surface water and feed on decaying matter.