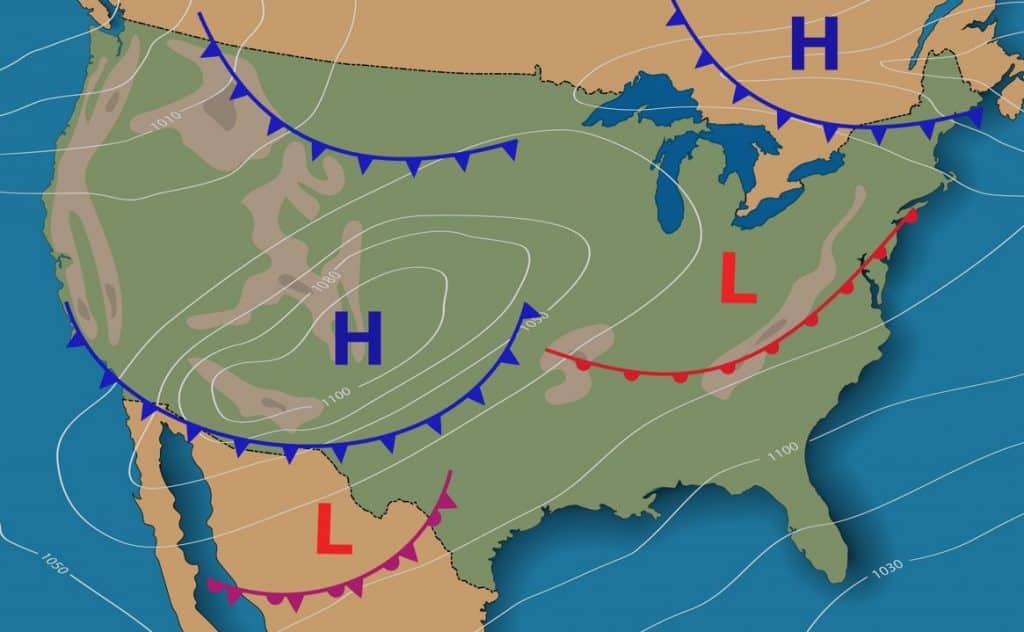 In the continental United States, air masses are commonly moved by prevailing westerlies and jet streams.  Colliding air masses can form four types of fronts.  A weather front is a boundary between two air masses.  Drastic weather changes often occur at fronts, including temperature, humidity, clouds, wind, and precipitation changes.  A cold front forms when a colder air mass moves toward a warmer air mass.  Showers and thunderstorms often form along cold fronts.  Warm fronts form when less dense and warmer air moves toward colder, denser air.  When water vapor in the warm air condenses, it often creates clouds that can bring steady rain or snow for long periods.  When the boundary between two air masses stalls, the front is called stationary; this leads to cloudy skies and light rain.  When a faster-moving cold front catches up with a slow-moving warm front, an occluded front forms, usually bringing with it some precipitation.

Some severe weather can cause significant damage.  Thunderstorms, tornados, hurricanes, and blizzards are all examples of severe weather.  A storm is a violent disturbance in the atmosphere that involves sudden changes in air pressure.  Thunderstorms are small storms accompanied by thunder and lightning formed from large cumulonimbus clouds.  A tornado is a rapidly whirling, funnel-shaped cloud that reaches down from a storm cloud and touches the Earth’s surface.  They are formed when thunderstorm updrafts begin to rotate.  When a storm starts over warm water, it can gain energy from the warm, humid air at the ocean’s surface, resulting in a hurricane.  Hurricanes are tropical storms that have winds of 74 mph or higher and can cause significant damage.  Finally, a blizzard is a violent winter storm characterized by freezing temperatures, strong winds, and blowing snow.