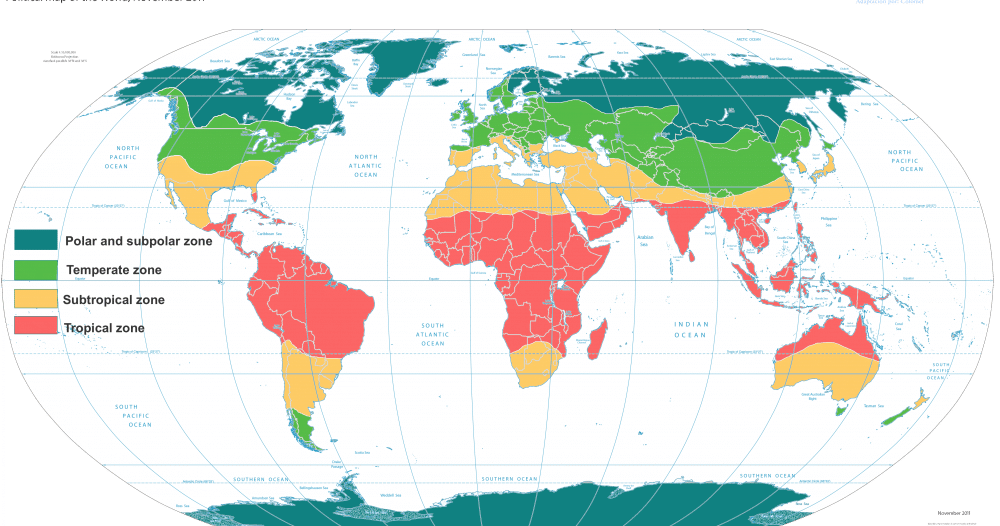 A tropical climate includes tropical, wet areas that experience year-round heat and heavy rainfall.  It contains dense forests called rainforests.  The tropical wet and dry lands have less rain and distinct dry and rainy seasons.  Savannas and tropical grasslands are found here. In contrast, a dry climate has hot summers and cool winters.  It includes arid regions called deserts, which get less than 25cm of rain yearly.  Semiarid regions, also called steppes, are usually located on the edges of deserts.  However, there is enough rainfall for short grasses to grow.

A temperate marine climate is humid, with warm summers and mild winters.  The marine west coast has moist air that brings calm, rainy summers and mild, rainy winters.  Humid subtropical climates are wet and warm but not as hot as the tropics.  In the Mediterranean, summers are drier and warmer, and the winters are cool and rainy.  The temperate continental climate occurs only in the Northern Hemisphere.   Subarctic is the line north of humid continental. Here summers are short, and winters are long and bitterly cold.  The polar climate consists of ice caps covered with ice and snow and always at or below freezing.  The tundra has short, cool summers followed by bitterly cold winters.