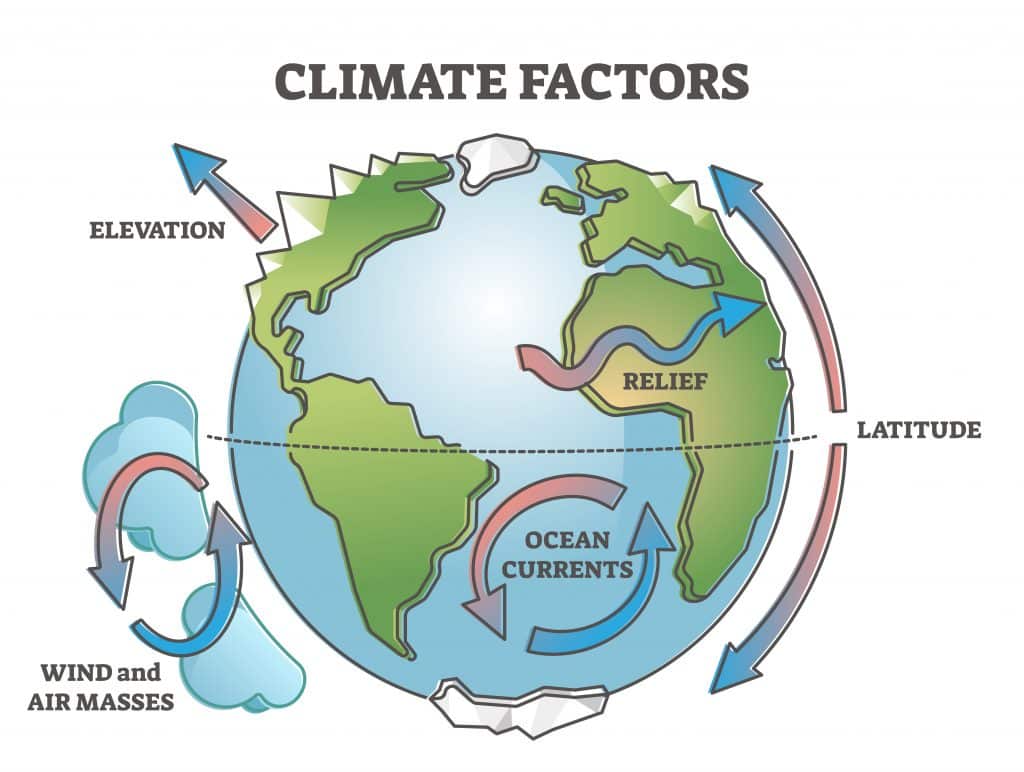 A climate is the average yearly conditions of temperature, precipitation, winds, and clouds in an area.  The climate of a region is determined by two main factors: temperature and precipitation.  The key factors that influence temperature are latitude, altitude, and large bodies of water, such as lakes and oceans, along with their currents and the distance that areas of land are from them.  The key factors that affect precipitation are prevailing winds, the presence of mountains and seasonal winds that change with the amount of energy each hemisphere receives from the sun. A microclimate is a small area with climate conditions that differ from those around them.

Main factors that influence temperature include latitude, altitude, distance from oceans and lakes, and ocean currents.  First, Earth’s surface is divided into three temperature zones based on latitude.  The tropical zone is near the equator, and it has a warm climate since it receives direct sunlight all year.  The polar zone has a cold climate because sun strikes the ground at a lower angle.  The temperate zones occur between the polar and tropical zones. Their weather ranges from warm in the summer to cold in the winter.  Secondly, climate is a factor because the air temperature decreases as altitude increases.  Thirdly, large bodies of water influence temperatures because water heats up and cools down more slowly than on land.  Marine climates have relatively warm winters and cool summers.  Continental climates occur in inland areas and are often characterized by cold winters and warm or hot summers.  Finally, ocean currents influence climate.  Currents cool or warm the air above them, bringing warm or cooled air to the land it touches.