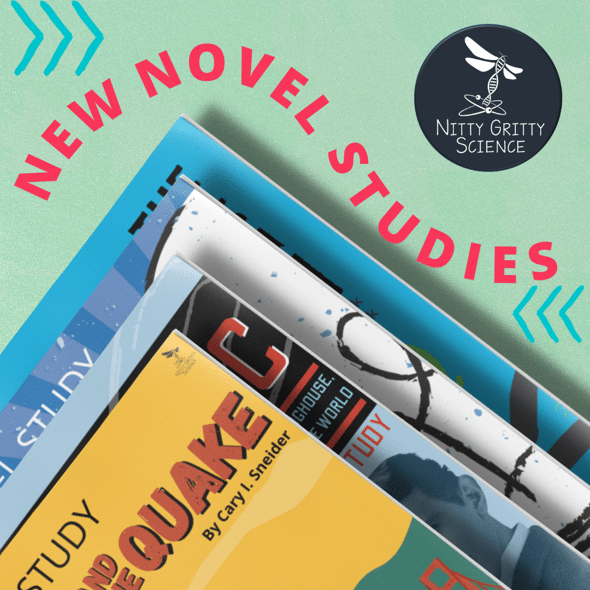 Today struggling readers face many long-term challenges and are more at risk of falling behind.  Science is a great way to engage students no matter their background.

Here at Nitty Gritty Science, we want to foster the love of reading and improve science literacy.  Science literacy is an understanding of scientific concepts, scientific processes, and the ability to make informed decisions related to societal issues.  We believe that using novel studies in the science classroom will not only give students exposure to different perspectives but will also help them develop an understanding of how science vocabulary applies to so many events in their lives.

Each novel study was created to be used in the secondary science classroom with a major focus on science vocabulary and reading comprehension.

Each Novel Study includes targeted vocabulary that helps students make connections between vocabulary and real life.  It encourages students to think before they begin reading, while they’re reading, and after.  It meets a variety of learning strategies that engage students and their ability to learn and retain science ideas and concepts.  This novel study was created to be used in the secondary science classroom and is perfect for those looking to focus on vocabulary and reading comprehension.  It is perfect for the whole class, in small groups, or for independent study.  It’s user-friendly for distance learning and both print and digital versions are available so students can access the digital version from home or school. 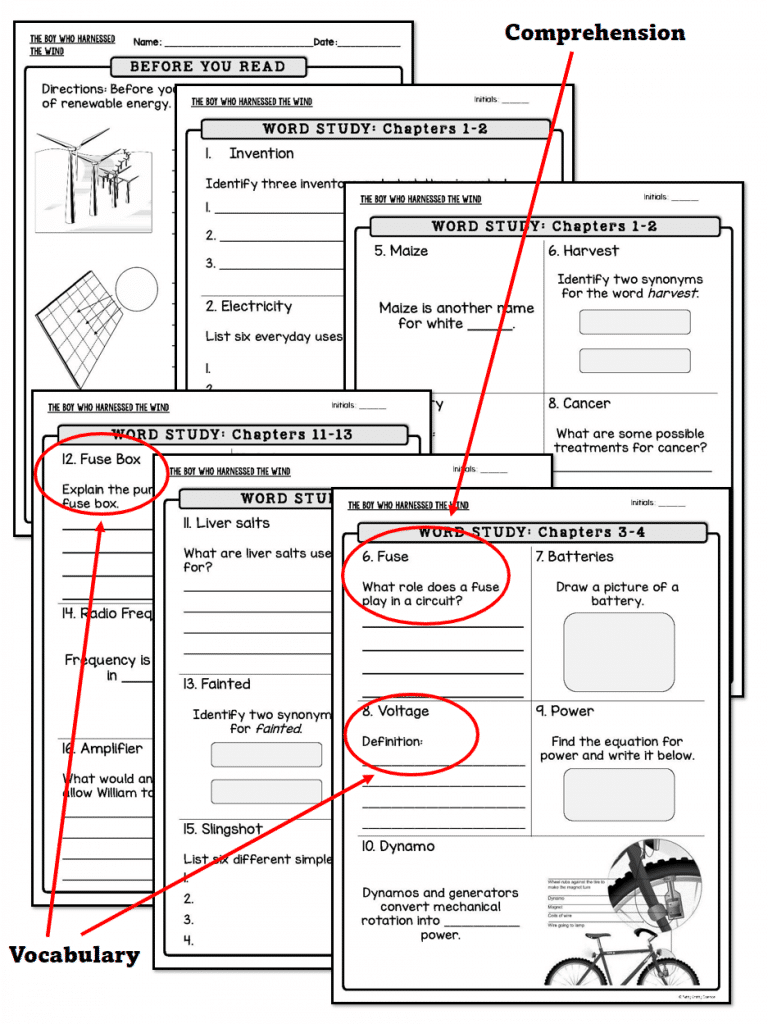 Physical Science Novel Studies include The Disappearing Spoon, The Electric War, The Radium Girls, The Boy Who Harnessed the Wind, and The Reinvention of Edison Thomas.

Life Science Novel Studies include Bees on the Roof and The Walking Fish.

Earth Science Novel Studies include Jake and the Quake and Hidden Figures.

Check out a brief synopsis below for each novel.

When a terrible drought struck William Kamkwamba’s tiny village in Malawi, his family lost all of the season’s crops, leaving them with nothing to eat and nothing to sell. William began to explore science books in his village library, looking for a solution. There, he came up with the idea that would change his family’s life forever: he could build a windmill. Made out of scrap metal and old bicycle parts, William’s windmill brought electricity to his home and helped his family pump the water they needed to farm the land.​  Retold for a younger audience, this exciting memoir shows how, even in a desperate situation, one boy’s brilliant idea can light up the world.

The Disappearing Spoon chronicles the extraordinary stories behind one of the greatest scientific tools in existence: the periodic table.​  ​Why did Gandhi hate iodine (I, 53)? How did radium (Ra, 88) nearly ruin Marie Curie’s reputation? And why did tellurium (Te, 52) lead to the most bizarre gold rush in history?​​  The periodic table is a crowning scientific achievement, but it’s also a treasure trove of adventure, greed, betrayal, and obsession. The fascinating tales in The Disappearing Spoon follow elements on the table as they play out their parts in human history, finance, mythology, conflict, the arts, medicine, and the lives of the (frequently) mad scientists who discovered them.​  ​Adapted for a middle-grade audience, the young reader’s edition of The Disappearing Spoon offers the material in a simple, easy-to-follow format, with approximately 20 line drawings and sidebars throughout. Students will love learning about the history behind the chemistry.

This book is the powerful story of four African-American female mathematicians at NASA who helped achieve some of the greatest moments in our space program. ​Before John Glenn orbited the earth, or Neil Armstrong walked on the moon, a group of dedicated female mathematicians known as “human computers” used pencils, slide rules, and adding machines to calculate the numbers that would launch rockets, and astronauts, into space.​  This book brings to life the stories of Dorothy Vaughan, Mary Jackson, Katherine Johnson, and Christine Darden, who lived through the Civil Rights era, the Space Race, the Cold War, and the movement for gender equality, and whose work forever changed the face of NASA and the country. 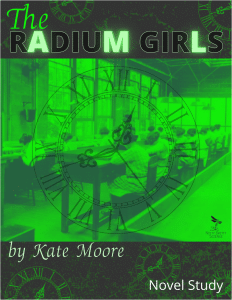 Explore the unbelievable true story of America’s glowing girls and their fight for justice in the young reader’s edition of the New York Times and USA Today bestseller The Radium Girls. This enthralling new edition includes all-new material, including a glossary, timeline, and dozens of bonus photos.  Amid the excitement of the early twentieth century, hundreds of young women spend their days hard at work painting watch dials with glow-in-the-dark radium paint. The painters consider themselves lucky—until they start suffering from a mysterious illness. As the corporations try to cover up a shocking secret, these shining girls suddenly find themselves at the center of a deadly scandal.  The Radium Girls: Young Readers Edition tells the unbelievable true story of these incredible women, whose determination to fight back saved countless lives.

The Bees On The Roof novel study follows the story of Sam, who needs to find a seventh-grade science fair project and a way to save the restaurant where his father works. When he enrolls three friends in an effort to raise bees on a hotel roof in New York City, the complications multiply. Bee sting allergies, a great bee die-off, a rival team’s cheating, a mysteriously reclusive science teacher, and Sam’s romantic feelings for a classmate make the bee project anything but simple. This story includes lots of facts about bees and Colony Collapse Disorder.

The Walking Fish tells a humorous, exciting tale of an ordinary girl who makes an extraordinary scientific discovery—a blind fish that walks.  When seventh-grader Alexis catches an unusual fish that looks like a living fossil, she sets off a frenzied scientific hunt for more of its kind. Alexis and her friend Darshan join the hunt, snorkeling, sounding the depths of Glacial Lake, even observing from a helicopter and exploring a cave. All the while, they fight to keep the selfish Dr. Mertz from claiming the discovery all for himself. When Alexis follows one final hunch, she risks her life and almost loses her friend.

Jake and the Quake

When Jake finds an unusual rock in the cliffs under the Golden Gate bridge, he embarks on an adventure of discovery that will bring him new friends, new knowledge, and even the confidence to face a devastating earthquake.

The Reinvention of Edison Thomas

Eddy’s a science geek and has problems communicating with others. The combination gives the class bully, who pretends to be Eddy’s friend, plenty of ammunition. Eddy Thomas can read a college physics book, but he can’t read the emotions on the faces of his classmates. He can spend hours tinkering with an invention, but he can’t stand more than a few minutes in a noisy crowd, like the crowd at the science fair, which Eddy fails to win. When the local school crossing guard is laid off, Eddy is haunted by thoughts of the potentially disastrous consequences and invents a traffic-calming device, using parts he has scavenged from discarded machines. By trusting his real friends, Eddy uses his talents to help others and rethinks his purely mechanical definition of success. 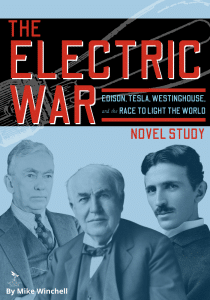 In the mid-to-late-nineteenth century, a burgeoning science called electricity promised to shine new light on a rousing nation. Inventive and ambitious minds were hard at work. Soon that spark was fanned, and a fiery war was under way to be the first to light—and run—the world with electricity. Thomas Alva Edison, the inventor of direct current (DC), engaged in a brutal battle with Nikola Tesla and George Westinghouse, the inventors of alternating current (AC). There would be no ties in this race—only a winner and a loser. The prize: a nationwide monopoly in electric current. Brimming with action, suspense, and rich historical and biographical information about these brilliant inventors, here is the rousing account of one of the world’s defining scientific competitions.

You may have noticed some Amazon Affiliate links throughout this post.  Just so you are aware, if you happen to purchase items using any of those links, Amazon sends me a small percentage which I throw back into Nitty Gritty Science to help fund giveaways and supplies for more demos!