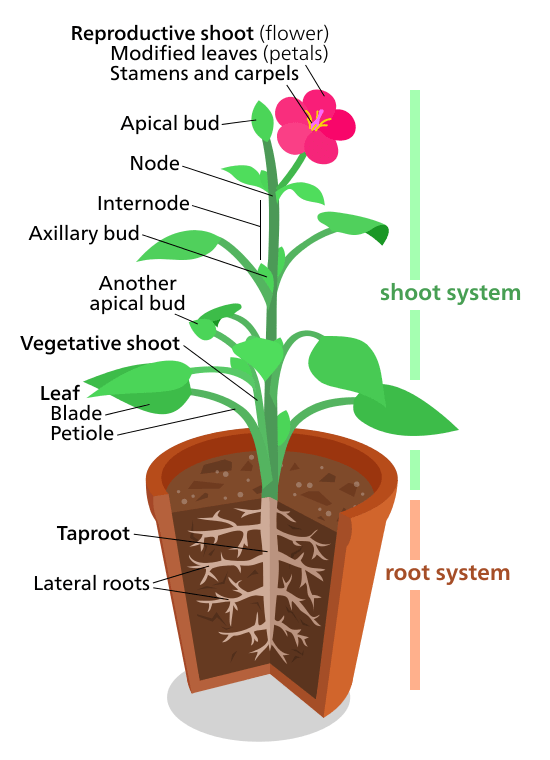 A typical plant body consists of three basic organs: roots, stems, and leaves.  Each carries out a specific function in order for a plant to develop.  A root is the underground part of a plant and the organ that anchors a plant to the ground.  A root absorbs water and minerals. It contains vascular tissue that helps move them to the stem.  All of the roots together form a root system.  The outside layer of a root is called the epidermis, whose function is to protect and absorb.  The surface of the epidermis is covered with root hairs, which make holes in the spaces in the soil allowing water and minerals to enter. The endodermis is a layer of ground tissue that moves water and minerals to the center of the root.  In the center of the root, the xylem and phloem make up the vascular cylinder.  The root tip is covered by a root cap that protects the root.  There are two main types of root systems called taproot and fibrous root.  Carrots and beets are taproots, which means they have a single, thick structure with smaller roots branching out.  Grass has fibrous roots, which have small branching roots that grow from a central point.

The shoot system of a plant contains stems and leaves. The stem produces leaves, branches, and flowers and provides the main support of the plant by holding its leaves up to sunlight.  It also carries substances between leaves and roots.  Stems transport water and minerals from the root to the other parts of the plant.  Stems have distinct nodes where the leaves attach.  They also have internodes or regions between the nodes.  Small buds or undeveloped plant tissue can be found where the leaves attach to the nodes.

Leaves capture the sun’s energy and carry out the food-making process of photosynthesis.  To collect sunlight, most leaves have thin, flattened sections called blades.  The shape of the leaf maximizes the amount of light it can absorb. The blade is attached to the stem by a thin stalk called a petiole.  A waxy cuticle and stomata, or openings in the underside of a leaf, allow a carbon dioxide and oxygen exchange and help reduce water loss or transpiration from the plant leaves.  Highly specialized cells called guard cells surround the stomata and regulate the movement of water vapor and carbon dioxide into and out of leaf tissues.

The structures within roots, stems, and leaves are made up of three tissue systems: dermal, vascular, and ground tissue.  The dermal tissue system is the “skin” or outer protective covering.  The outer layer is called the epidermis, and it’s covered with a cuticle that prevents water loss.  The vascular tissue system is the “bloodstream” that provides support and transport.  It supports the body and transports water and nutrients throughout a plant.  The xylem and phloem cells are essential to this process.  The ground tissue system consists of everything else, including photosynthesis and storage. The edible parts of plants like asparagus are ground tissue. 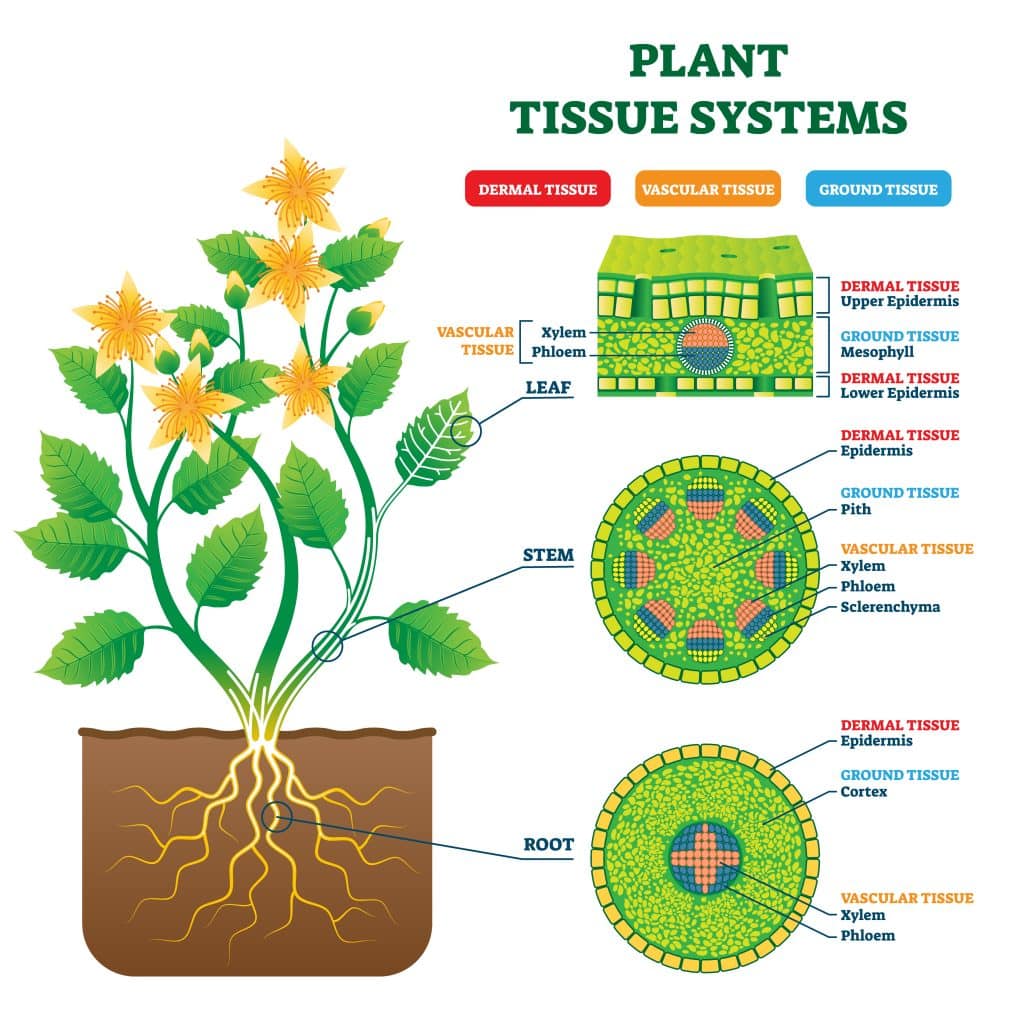