Each element can combine in many different ways to make millions of compounds.  Scientists look at how and why elements react with each other to form compounds.  A compound is a substance that is made of the combined atoms of two or more elements.  For example, H20 is the combination of two hydrogen atoms and one oxygen atom.  A chemical formula tells us the exact number of atoms of each element a compound is made up of.  When looking at a chemical formula, we look at the coefficient, subscript, and superscript to help us identify the compound.  The coefficient represents the number of units of each of the substances.  The subscript represents the number of atoms in a molecule of that particular element.  The superscript represents the oxidation number or how many electrons have been gained or lost.

Atoms form compounds to become chemically stable.  An atom is considered chemically stable when the outer energy level is complete, or full.  Atoms gain, share, or lose an electron to become stable.  An atom that has lost or gained an electron is called an ion.  It is a charged particle that has either fewer or more electrons than protons, resulting in a negative or positive charge.  A chemical bond is a force that holds together the atoms in a substance to make compounds more stable.  There are two kinds of bonds formed.  In an ionic bond, one atom gives away its electrons and another accepts them.  As a result, each has a full outer shell of electrons, which makes it neutral because the total of the ion charges is zero.  In a covalent bond, the atoms sit together and share their electrons so that they both have full outer shells.  A water molecule consists of two hydrogen atoms and one oxygen atom.  Each hydrogen atom shares its single electron with the one from the oxygen atom, forming covalent bonds.  Some elements like the noble gases do not give up their electrons, so they don’t usually react with other elements. 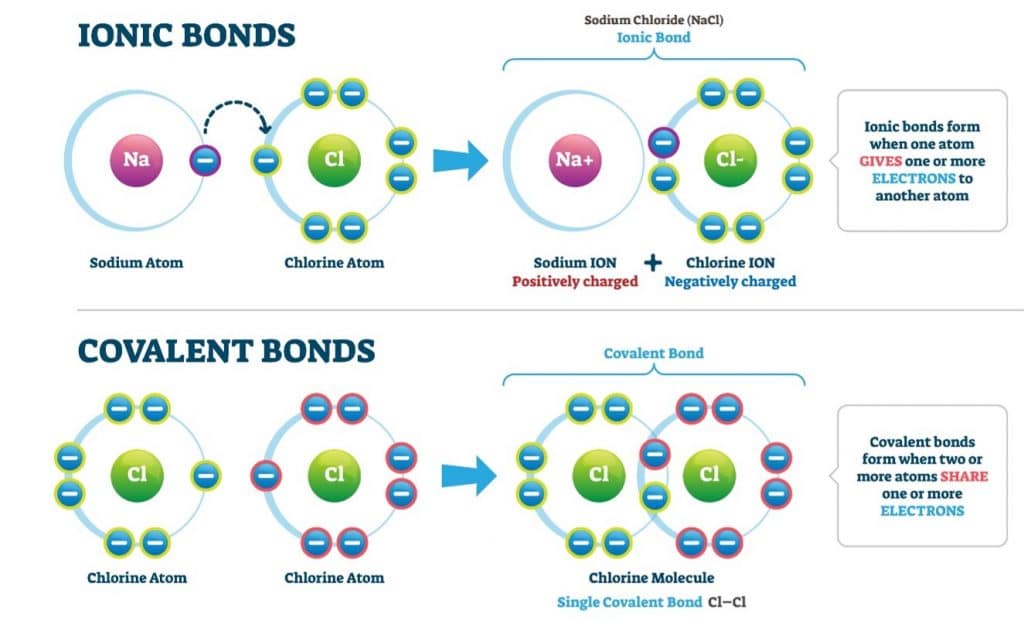