Biodiversity consists of all of the organisms in the biosphere and human activity is largely responsible for contributing to its decline. Biodiversity exists on three levels: ecosystem diversity, species diversity, and genetic diversity. 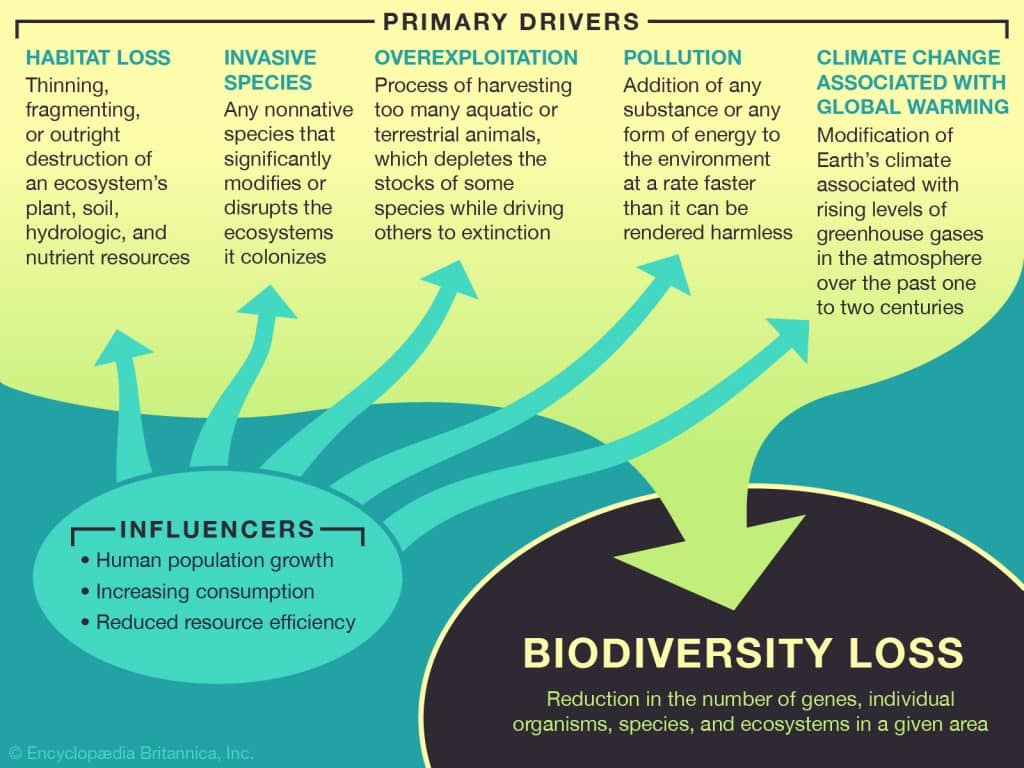 Extinction, endangered species, habitat destruction, and invasive species all pose threats to biodiversity.  Extinction occurs when a species disappears from all or part of its range.  Once it is extinct it can never return, and human activities are largely responsible for it.  An endangered species is one whose population is declining or losing its genetic diversity.  The more genetically diverse a species is the better chance it has for survival.  The changing of a habitat leads to habitat fragmentation and habit degradation.  Land development separates ecosystems into pieces, cutting species off from their habitat and leaving them essentially as islands.  Damage caused by air, water, and land pollution as well as over-development can lead to deforestation and the destruction of habitats.

Invasive species also disrupt ecosystems.  An invasive species is introduced to new habitats that lack parasites or predators for population control.  Invasive species can also disrupt food chains and prey on native species, which can lead to extinction of a native species.  For example, the cane toad was brought to Australia in 1935 in an attempt to control the cane beetle population.  The problem was that there were very few natural enemies to it in Australia.  Their appetite depleted resources for native animals.  Many things were tried, but despite scientists’ best efforts, an answer has not been found to eradicate the toads.

Many of the environmental problems we’re facing today are of our own making. Species, habitats, and ecosystems must be protected, and conservationists have developed many solutions to help reverse the damage and negative impact we’ve had.  Where habitats have been severely destroyed, habitat corridors have been established.  These are strips of land to allow organisms to move freely from one wilderness area to another.  Reintroduction programs take endangered species and breed them and raise them in protected habitats.  Sustainable development is a long-term goal that lets people use resources without harming the ecosystem.