A volcano is a weak spot in Earth’s crust where molten material, or magma, comes to the surface.  Magma is the molten mixture of rock-forming substances, gases, and water from the mantle.  When magma reaches the Earth’s surface, it is called lava.  Once lava cools, it forms solid rock.

At plate boundaries, the crust often fractures due to the pulling and pushing of plates.  As a result, these fractures allow magma to reach the surface, forming volcanic belts along the boundaries of the Earth’s plates.  One primary belt is called the Ring of Fire, which is formed by volcanoes that rim the Pacific Ocean.

An island arc is a string of islands created by volcanoes near boundaries where two oceanic plates collide, and one sinks beneath the other.  A hot spot is an area where material from deep within the mantle rises and then melts, forming magma.  A volcano begins above a hot spot when magma erupts through the crust and reaches the surface.  The Hawaiian Islands were formed as the Pacific plate drifted over a hot spot. 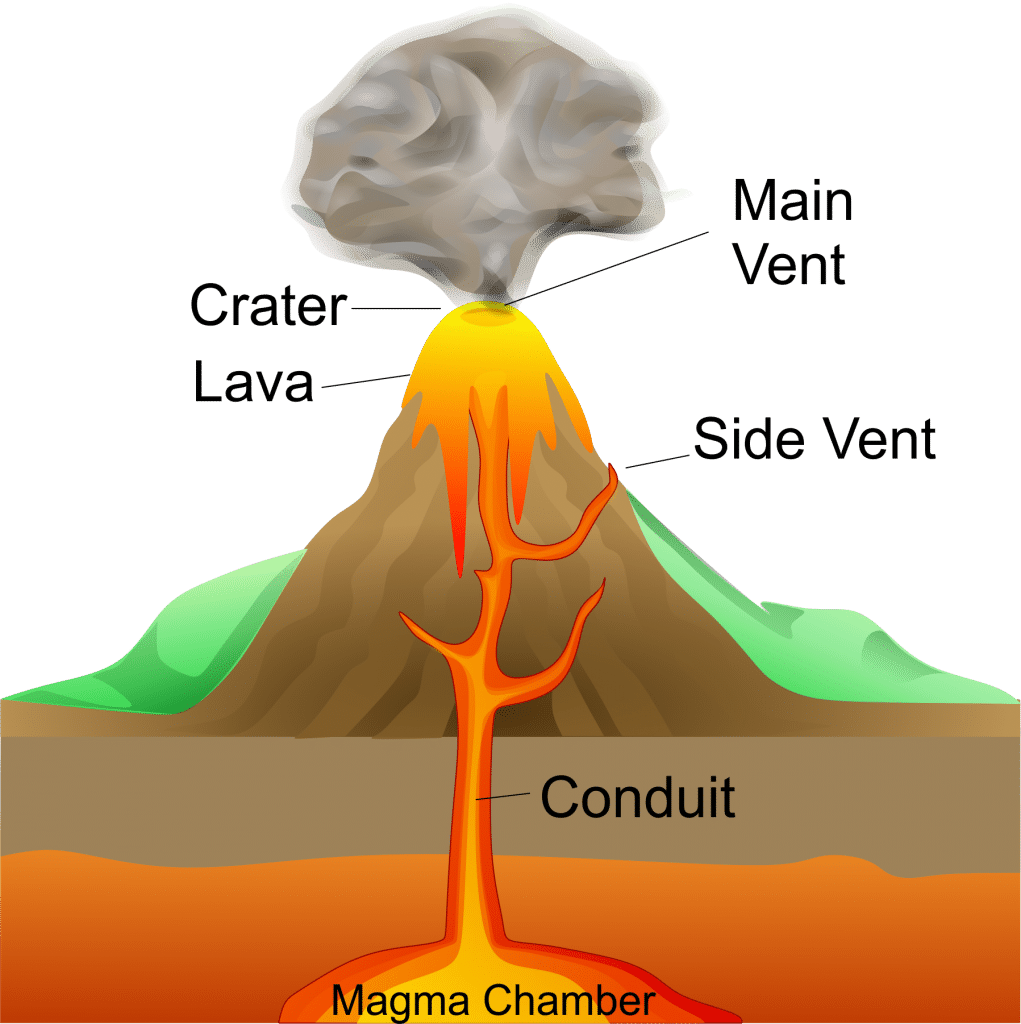 Inside a volcano is a system of passageways through which magma moves.  This system includes a magma chamber, pipe, vent, lava flow, and crater.  When a volcano erupts, magma is pushed from the magma chamber through the pipe until it flows out of the vent.  First, magma collects in a pocket called a magma chamber.  It then moves up through a pipe connecting the magma chamber to Earth’s surface.  Finally, rock and gas leave the volcano through an opening called a vent.  Usually, there is one central vent at the top of a volcano; however, many volcanoes also have vents on the sides.  A lava flow is an area covered by lava as it flows out of a vent.  Finally, a crater is a bowl-shaped area that forms at the top of the volcano around the vent.

Geologists classify volcanic eruptions as either quiet or explosive.  A quiet eruption occurs when gases bubble gently and lava oozes quietly due to its low silica content.  This eruption can produce pahoehoe (fast-moving, hot lava) and aa (lava that is cooler and slower moving).  An explosive eruption has magma with high silica content. It is too sticky to flow very far and has high viscosity.  Because of the high viscosity, trapped gases build up pressure until they explode, causing pyroclastic flow or an eruption that hurls out ash, cinders, and bombs.

Scientists also categorize volcanoes based on the likelihood that they will ever erupt again.  An active volcano is currently erupting or shows signs of potentially erupting again soon.  A dormant volcano is not active but may become active.  An extinct volcano is unlikely to erupt again.